By News Staff on April 9, 2014 in Government Agencies/Utilities 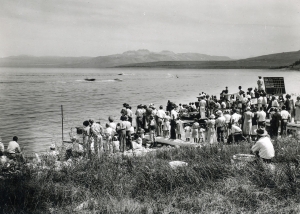 Mark Twain offered a caustic assessment of Mono Lake, noting that its alkaline waters wouldn’t support any sort of life, be it fish, frogs, snakes or polliwogs – “nothing, in fact, that goes to make life desirable.”

Other writers in the 1870s and 1880s also detailed the lake’s lack of life, except for horrendous swarms of brine flies, and predicted the desolate body of water had very few potential uses, since it was, for all intents and purposes a “dead sea.”

That assessment didn’t deter several generations of Mono County residents from attempting  all manner of developments on the lake, from oil drilling to farming to commercial boating to tourism. Despite all that activity, and the lake’s location next to U.S. Highway 395, in the 1980s, a co-founder of the Mono Lake Committee said the lake was, “one of the last untouched ecosystems in the state.”

Those perceptions of the lake’s “value” are explored by Abraham Hoffman, Ph.D, in his newest work, “Mono Lake: From Dead Sea to Environmental Treasure.” Hoffman, a long-time history professor at Los Angeles Valley College, is well known to Eastern Sierra history buffs for his award-winning book, “Vision or Villainy: Origins of the Owens Valley–Los Angeles Water Controversy.”

Hoffman will sign copies of his Mono Lake book and present a talk on the volume on Saturday, April 12 at 7 p.m. in the American Legion Hall in Independence. The event is free to the public and sponsored by the Friends of the Eastern California Museum.

“Hoffman’s meticulously researched and balanced book is a needed rejoinder to the environmental cleansing of Mono Lake’s contested human history,” notes Steven P. Erie, author of “Beyond Chinatown: The Metropolitan Water District, Growth and the Environment in Southern California.”

Hoffman’s book relates that, for a “dead sea,” Mono Lake generated quite a bit of lively, human activity.

The Mono Paiutes took their name from the brine-fly larvae they harvested from the lake, and they also collected bird eggs and hunted the ducks and other birds stopping at the lake. Seeking food to feed the miners in the booming gold camp of Bodie, enterprising souls rowed boat to the lake’s islands and collected thousands of eggs, and shot thousands of ducks and other birds.

Bodie’s golden fortunes faded, but the search for natural resources in the area took an interesting turn in the late 1800s when promoters proposed drilling for oil on Mono Lake. They eventually sunk some oil wells, but didn’t find much. However, the hype surrounding their efforts rippled to Los Angeles and beyond. Well into the 20the century, various experts and promoters pitched the lake as a source of “black gold.”

In the years preceding World War II, farms and ranches came to occupy the land around the lake, and fairly consistent efforts were made to promote the area as a tourist destination, touting “unsurpassed mountain scenery” and “the best trout fishing” in the state. Big hopes came with the completion of State Route 120, linking the area to Yosemite. The completion of Highway 395 made many of those hopes realities, since it linked the Eastern Sierra to Southern California. Eventually, tour boats, movies and other commercial operations and tourist amenities, including several inns and lodges, became part of the lake’s history. As did lively Mark Twain Day celebrations, honoring the writer whose faint praise for the region was turned into a source of pride.

More progress was made publicizing the area’s attractions with the help of the Los Angeles Department of Water and Power, which paid for promotional efforts such as exhibits for Inyo and Mono counties at Los Angeles and Southern California “sportsman shows” and fairs.

The relationship between LADWP and Mono County, and eventually the Mono Lake Committee is a long and convoluted, and includes decades of legal disputes when LADWP condemned land and water rights in the 1930s, to a span of minimal friction after completion of the Mono Craters Tunnel and Expansion Project in 1941. Eventually, with LADWP diverting water from the creeks and streams feeding the lake into its LA Aqueduct system, the lake level started to fall, but concerns didn’t arise about the dropping water levels until the 1970s. That’s when the environmental battle over Mono Lake drew national and worldwide attention, and the perception of the lake as an unspoiled, unpolluted natural treasure was created and used to great effect by the Mono Lake Committee and others.

While most might be familiar with this recent history of Mono Lake, Hoffman provides a detailed, even-handed and extensive look at the groundbreaking legal and environmental conflict, and its ramifications, which are still being felt today.

Hoffman details all aspects of the lake’s history, large and small. Whether is underwater bomb tests and plane wrecks, or the precedent-setting battle with LADWP, his research is meticulous and his writing sharp and clear.

The free presentation by Hoffman on April 12 is sponsored by the Friends of the Eastern California Museum. Hoffman will be available to sign copies of “Mono Lake: From Death Sea to Environmental Treasure,” which will be for sale at the event. The Legion Hall is located on the west corner of U.S. 395 and Kearsarge Street, in Independence. For more information, call the Museum at 760-878-0258.