In 1996, Benett Kessler started this company, Sierra Broadcasters, by putting on the air KDAY
Radio, 92.5 FM. I came on board 6 months later and not too far behind me was Bob Todd.

Benett at the time was working as editor for the Inyo Register along with Bob as the sports
writer. She told me about Bob and how she would hear him on the phone gathering
information for his sports column. She said she thought he would be a natural on the
Radio……..she was right. 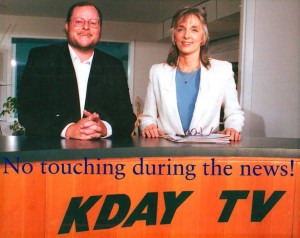 Bob started a morning shift that he built into the Bob Todd Show. At the time we played an
adult contemporary format. Bob was a Deadhead and classic rock fan, but he played the
Adult Contemporary songs Benett programmed and asked him to play. Bob loved sports of
all kinds and he made it his mission to report on all local sports. Bob was a stickler for the
stats and the facts, it had to be right.

Bob told me one day about local sports, if a kid kicked a ball, caught a ball, threw a ball, or
participated in any school sport, sooner or later they would be mentioned on Bob Todd Sports.
Bob appreciated the effort put out by all the kids that played a local sport and felt they should
be recognized for that.

When we added Television Channel TV3 to the company in 2000, Bob would travel to all the
Bishop Bronco and Mammoth Husky High School Football games and film them along with
brother Spike Todd and pastor Kent Puls. They would drive back that night from wherever the
game was and Bob would come into the studio to edit the game and get it on TV3 for
broadcast the next day. He would go home for a couple of hours sleep, and then come back
to start his Radio Show at 6am that morning.

Bob ,Spike and Kent took great pride in bringing local High School Football to Television.
As the years went by Bob slowly started working into the radio programming some Grateful
Dead and classic rock songs. Benett was a tough sell, but still allowed Bob to continue to
add the music he enjoyed and felt his listeners wanted. This time Bob was right. His morning
show grew in popularity. He had a huge following for the music he played, the sports he
reported on, and his gift of gab.

Bob was Old School in the way he ran his show. No computer play lists for him, just stacks of
well used CDs all over the studio, but Bob knew where each CD was and what number the
song was that he wanted to play next. He was a great talent, in many ways.

Bob soon gained a side kick for his most popular feature, 10/20 Trivia. Bob Todd and
Catherine Hurdle were a good yin and yang. Bob and Catherine both had a quick wit and
played well off one another. 10/20 Trivia was a hit and it was all Bobs idea…a part of his
show.

When we lost the founder of our company, Benett Kessler in 2015 Bob had already taken
over the news side of the business. Gathering news and delivering it on both our radio and
television stations, maintaining the news on our web site, and doing a great job at that.

During the 2007 Inyo Complex Wild land Fire that threatened the town of Independence and
the historic Mt Whitney fish hatchery, Bob grabbed a camera and starting covering the fire
along with Benett Kessler, shooting video for the TV news and bringing the latest information
to the public on the Radio. This was not part of Bobs job description, but it was a part of his
DNA to do what is needed no matter what to keep the public informed.

Bob was a stickler too for proper spelling and grammar and most of all punctuation. Me, not
so much, but Bob inspired me to get better. Anytime I wrote a letter to a client I would ask
Bob to edit it for me. My goal was to have no edits. I wanted an A+, I wanted to make Bob
proud……..but he always found something.

Bob loved his job, he loved entertaining his listeners and he loved the Grateful Dead.
Bob was in the Radio studio every morning at 6am, no fail. Bob and I had a running joke on
how many times over the years we greeted each other in the morning, “Good Morning Bob”
and back to me with a “Good Morning Bill”………somewhere over 5000 times I figure.

Bob loved his family and his dogs. He took great pride and satisfaction in reuniting lost pets
with their owners by putting out the word on radio as soon as he had it in hopes that he could
help get a beloved pet back to there family.

He loved all people, he would always choke up on air doing obituaries for others that passed,
even ones he never knew. Bob Todd had a huge heart.

He had a thing too. Anytime I was going to be away from work for a few days, Bob would
without fail make it a point to come to my office and offer a hearty hand shake and wish me
safe travels. I’l never forget that.

Bob was not only my co-worker for over 20 years he was my friend, and I’m a better person
for knowing him.

Now……safe travels to you Bob Todd. You added so much joy to so many with The Bob Todd
Radio Show every morning. You have left your mark…and it’s huge.

One final thought…I hope my spelling, grammar and punctuation is correct on this, otherwise
I’m sure I’ll be hearing from Bob.

I use to always say ” Hello you beautiful person” And he knew it was me with a ” hay Rosie” Then I would request a song. Always knew when your song would come on next with a “Make my day” Bob made a lot of peoples day! K Day… Read more »

I used to live in Bishop and after I moved away I kept up with the local news through Sierra Wave and Bob Todd. He’ll surely be missed. RIP Bob.

I was Bob’s co-worker in Watsonville from 1984-96. In 1999, he came up and stayed at my place so we could go to a couple of Stones show. I went out the first morning to get breakfast, and when I came back Bob had already found my Stones records. He… Read more »

Between him and John Young being gone we have lost the voices of the Easter Sierra….RIP Bob!!

I was sad to here this – RIP

Bill, thanks for your rememberance article. May Bob rest in peace knowing he made a positive deference in so many people.

RIP Bob Todd. We will sorely miss hearing his voice on the TV and radio. This is very sad news. Condolences go out to his family and loved ones.

Bob was very kind and was a genuine and special soul. He never failed to wave hello whenever he was outside the radio station. We have been missing Bob for sometime now. . But God has called him home and we Must celebrate him. Bill you did Bob proud Your… Read more »

RIP Bob Todd your voice will be heard. Best Mike

I am shocked it’s been a few years since we’ve seen him. We always saw him on the course in Bishop. That’s how I met him. He always had a warm hello and then it was off with his buddy Steve to play as much before the sun would set.… Read more »

Bob’s voice was synonymous with the Eastern Sierra. An icon. He will be sorely missed. So sorry to read this.

Spent every morning for the past 11 years driving to work from Bishop to Independence with Bob and his ‘tunes’. Just loved his attitude, his bits with Catherine, and his keen observations about 60s music. He will be greatly miss!

I’m so sorry to hear about Bob. I’ve since moved away from the Eastern Sierra but I will always remember Bob as a mainstay from my years in Bishop. I loved the morning show he did with Catherine Hurdle (sorry if I spelled her name wrong, but they were quite… Read more »

Bob will be missed! I loved listening to him on my way to school with the kids every day. He always shared our cheerleading news and information on the air for us and had a way of making everyone he spoke with feel important. God bless you, Bob Todd!

I loved hearing Bob and Catherine on the radio together; they were just hilarious. He truly had a passion and skill for reporting the sports news. His passing leaves a big hole in the community; my condolences to his friends and family.

I really liked Bob, his corny jokes and 10 20 trivia and always announcing our local tribal events. Rest in peace Bob, you will be missed and prayers to your family and all of
your fans

There needs to be a statue of these two.

Bob filled my mornings with happiness. If you were having a bad day and turned Bob on, you were sure to laugh. He was the sweetest guy ever. I am truly going to miss him. He was truly a special guy. RIP Bob.

Is there a service planned or somewhere to send memorials?

Thank you. Please keep us posted. (By the way, I knew Bob from his Watsonville days and beyond; I was married to Bob’s good friend Richard “Richie” Egan.)

So sorry to hear about Bob Todd. Bob you left your mark on the citizens of Inyo County. RIP Bob Todd.

Bob and I had a special bond, which I’m sure he had with many who adored him. I will miss that voice and quick wit. He was the best sports/newscaster and DJ your station ever had. My sincere condolences to his family, co-workers at SWN and his friends. May you… Read more »

I’m so very sorry to hear of the passing of Bob. I have driven by the station on Wye Rd and would often see Bob out front, mike in hand and doing a report. He will be missed by all.

Bob was a very good person, knew him personally ad professionally. He was a local legend on the airwaves and his local broadcasts of BUHS and MHS football games were a weekly staple in our home. You will be sorely missed Bob. Way too young, RIP!

Was very lucky to know Bob. He allowed me to broadcast Mammoth Husky football games with Greg Bretz, Charles Scatolini, Mike McKenna and others. He always was extremely prepared for both Bishop and Mammoth games giving me a real boost doing the games. His newscasts were always done with style… Read more »