By News Staff on July 9, 2011 in Entertainment/Local Events/Activities 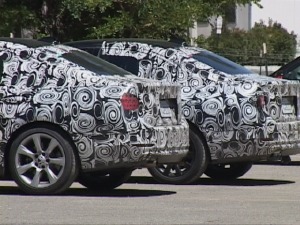 An undercover invasion of BMW prototypes was revealed by local automotive sources over the weekend.  Some two dozen BMW F-30 models for next year could be seen in the parking lot of the Nazarene Church off West Line St.

One of the drivers on scene confirmed that the BMWs came here to test next year’s model.  The company disguised the BMWs for secrecy in the process.  The driver also confirmed that the cars were tested in the July heat of Death Valley as well as high elevation locations around the Eastern Sierra.

Internet sources confirmed that F30 BMWs were also spotted in New York City and in Malibu.  The prototype camouflaged models were covered up with the kind of flower-design look to disguise the BMW.

It’s all very hush-hush even though car enthusiasts have spotted these test drives all over the country and reported them.

I saw one of these cars several times in the Bishop area last week. Thank god they were purposely camouflaged because my first reaction was how could anyone have such crummy taste in paint schemes.

This probably happens much more than you realize. BMW has a road testing group based in the Port Hueneme area that drives around “camouflaged” new models all the time. They like the area because they can go from sea level/salt air to desert to mountains in the span of a… Read more »