MAMMOTH LAKES, Calif. – Crews working for the U.S. Geological Survey Research Drilling Unit are anticipated to begin work on a groundwater monitoring well in the northwest portion of the Mammoth Mountain RV Park in Mammoth Lakes, during the week of Nov. 27. 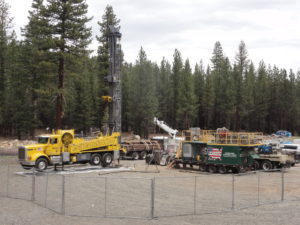 Drilling operations will run up to 12-hours per day, seven days per week, for about two weeks. The work is being conducted under an agreement with the Bureau of Land Management Bishop Field Office.

The BLM, in coordination with the Inyo National Forest, Mammoth Lakes Ranger District, approved the well installation as part of the Groundwater Monitoring and Response Plan for the Casa Diablo IV Geothermal Development Project. Mammoth Mountain RV Park operates on national forest system land under a Special Use Permit with the Inyo National Forest.

Residents and visitors should anticipate increased activity and vehicular traffic in and near the RV Park, including Main Street (California State Route 203), Thompson Way and the bike path in front of the RV Park.

The BLM manages public lands and resources for the benefit of current and future generations, and is committed to providing for environmentally responsible energy development that contributes to America’s energy independence.

The BLM manages more than 245 million acres of public land located primarily in 12 Western states, including Alaska. The BLM also administers 700 million acres of sub-surface mineral estate throughout the nation. The agency’s mission is to sustain the health, diversity, and productivity of America’s public lands for the use and enjoyment of present and future generations. Diverse activities authorized on these lands generated $75 billion in sales of goods and services throughout the American economy in fiscal year 2016—more than any other agency in the Department of the Interior. These activities supported more than 372,000 jobs.

I’m tempted to go out there with a lounge chair and video people flipping out over what they don’t know is going on.
I’m easily entertained, I know.