By News Staff on March 18, 2013 in Government Agencies/Utilities

Public reaction to news of the local Bureau of Land Management patrolling for people “illegally taking artifacts out of the desert” has been mixed – from anger and outrage to belief in regulations. The BLM Field Office Manager Bernadette Lovato talked to Sierra Wave Media about details of enforcement. 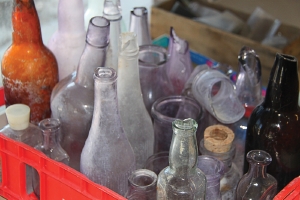 To many in the Eastern Sierra, bottle and can collection from the desert is a fun pastime, but to BLM it can be a law violation and in some cases deserves penalties. Lovato said her two law enforcement officers use several national acts to protect the desert. She said the Antiquities Act of 1906 says objects 100 years or older must stay where they are. Lovato said the National Historic Preservation Act protects items 50 years old or more. She said BLM protects these items while they are under consideration for the National Register.

Aware of the public outrage sparked by recent news of a BLM investigation of a retired man collecting junk in the desert, Lovato said these are uninformed reactions. She said, “This is an ongoing investigation, and I can not comment.” Lovato did say there is nothing on the public record at this point on the case in Chalfant.

Lovato related an incident that reveals the public hostility over regulation of their desert collecting. She said one of her employees, unrelated to the bottle collection issue, was volunteering at the soup kitchen in Bishop and got booed one afternoon. Said Lovato, “Unfortunately, people think it’s okay to remove historic objects from public land. Once removed,” she said, “they’re removed from their context, scientific context, and it’s gone and we can’t complete the story.”

Lovato said BLM is not out there actively keeping people off public land. She said BLM just hopes people will treat public land with respect and leave things there and let others see it. The BLM manager also said that because collection of things in the desert has been “an accepted activity here, from a societal standpoint people haven’t felt peer pressure that it’s wrong.” She said, “They think that it’s okay to take historic objects and put them on the mantel or patio. It’s the public’s resources.”

There are two BLM law enforcement officers in the Bishop Field Office which covers Inyo and Mono.

I believe the BLM’s intentions are noble.
I also believe they are dreaming if they think this policy is going to fly with the public.

I hear that there are tons of artifacts abandoned just east of Bishop. The original owners aren’t using them, and they are wasted being buried out there. Anyone know if the cemetery has a night watchman? I was also wanting to build an outbuilding here at my home, I think… Read more »

Can everyone choose the laws they do and don’t want to follow?

i still say finders keepers,these old things people find would either be broken into bits or dissintegrate,maybe a local museum could pay people if they bring them in

Still waiting to here about those gas engines stolen from BLM managed land.

and the funny thing is they were displayed under the BLM’s nose at the Tri-County Fair!

Sounds like a government agency that could be targeted for sequester cuts.

I’ve lived in the Owens Valley for over 40 years, and everyone I went to school with collected arrowheads, bottles, old auto license plates, deer and elk sheds, quartz crystals and all manor of old stuff either dumped as garbage or lost during a hunt. I’ve seen hundreds of broken… Read more »

So, it’s OK to drain the one hundred square mile Owens Lake and divert all the water killing trees and wetlands while displacing wildlife and ranchers but it’s not OK to disrupt litter that documents the disgusting presence of man in a valley once so beautiful that it boggled the… Read more »

Surface bottles were dis-carded back in their day because they were TRASH,GARBAGE, LITTER, REFUSE, etc. When I first started collecting bottles back in the 80’s, I would almost cry every time I would come upon a pile of broken purple glass that some idiots had used for target practice. Maybe… Read more »

“She said one of her employees, unrelated to the bottle collection issue, was volunteering at the soup kitchen in Bishop and got booed one afternoon.” I’m pleased to hear this. The days of hiding behind the agency and just doing your job are over. I wish I was there to… Read more »

You are not well and need help.

I have a couple of old trucks I’ve been hanging on to that are well over fifty years old. Mono County tells me that I can not keep them on my own property, which I pay outrageous property taxes on. Apparently the County regards the trucks as an eyesore. Would… Read more »