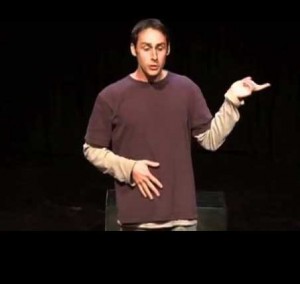 “This is honestly one of the best one-man play I have ever seen,” said Shira Dubrover, Artistic Director of MLRT. “The community loved the play so much last year that we decided to bring it back to the Edison stage again this year.”

Stanton plays 12 hilarious yet poignant characters in BLANK to tell his true adoption story, the title referring to the name space on his Original Birth Certificate. He embarks on a mythical quest for identity and the truth isn’t always pleasant. His horrific discovery ultimately leads Brian to unveil an instinctive love for his birthmother, a grateful dedication to his adoptive family, and a sense of wholeness within.

Succeeding BLANK, Patti Hawn complements Stanton’s experience as an adoptee by bringing a birthmother’s perspective of her teenage pregnancy, the surrendering of her son to adoption, and the search to reunite with him 40 years later. Together, Hawn and Stanton will stage readings from her brave memoir GOOD GIRLS DON’T followed by a talkback with the audience.

BLANK, directed by McKerrin Kelly, had its World Premiere in Los Angeles in April of 2010. The production has since visited Off Broadway New York, Chicago, San Francisco, Boston, D.C., Vancouver, Dallas, Kansas City, Aspen, Orlando, and San Diego garnering critical acclaim along the way including a “Best Solo Actor” award at the United Solo Theatre Festival in New York City and 2 StageSceneLA awards: “Outstanding Actor in a Solo Performance” for Stanton and “Outstanding Director of a Solo Performance” for Kelly. BLANK and Stanton have been featured on NPR, ABC News and The Kansas City Star.

GOOD GIRLS DON’T is the debut literary effort of entertainment publicist Patti Hawn who shares a deeply personal first-hand account of what it was like to be trapped in an unwanted pregnancy at the close of an era where home economics took precedence over sex education.

Her story starts in her childhood home in Takoma Park, Maryland, where as a teenager she became pregnant by her high school boyfriend. In the typical “solution” of the era, she is sent away to have the baby in secret and gives up her infant son the day he is born.  Hawn has been featured in USA Today & the Boston Herald.  As publicist, Hawn has worked on over thirty major motion pictures including Ghost, Glory, Overboard, and most recently, August Rush and Bride Wars.

Tickets purchased online at MammothLakesRepertoryTheatre.org are $10 for children, $18 for students and seniors, and $20 for general admission. Tickets at the door will be $22. Call 760-934-6592 for more information. Rating: Mature audiences. Further info on Stanton & Hawn respectively:blankbybrianstanton.com & goodgirlsdontbook.com

The Mammoth Lakes Foundation offers free education (books and tuition) to any Mono County resident and/or high school graduate who pursues an AA degree at Cerro Coso Community College and provides year-round theatre programming at Edison Theatre. For more information or to make a tax-deductible donation, please contact the Foundation at (760) 934-3781 or visitMammothLakesFoundation.org. Our nonprofit work is only possible through your generosity.