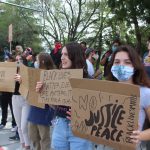 The Black Live’s Matter Protest Rally that had been abruptly cancelled late Monday night because of “real threats” according to the original organizer worried about the safety of his family, friends and those that would attend, went on as planned on Tuesday morning at Bishop City Park with an estimated crowd of at least 130 to 140, mostly young protesters.

Local young people from Bishop and the surrounding area spontaneously, using social networking platforms such as such as Twitter, Snap Chat, Instagram, Tik Toc, and Private Chat rooms, put the protest back into play within hours of the announced cancellation. These are social media platforms not typically used by many of their parents and older adults who prefer texting and Facebook. 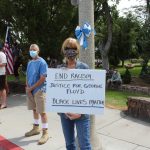 It was not just young people attending the protest. 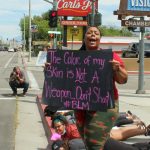 Many of the older adults intending to participate, never heard that the young people had “uncancelled” it, and that it was going to happen regardless of threats posted by some on local Facebook pages.

The crowd was composed mostly of young adults, students and graduates of Bishop High School, and college students, along with some older adults. Collectively, they represented just about every race and ethnicity that makes up America today. There were White-Americans, Black-Americans, Native-Americans, Asian-Americans, and Latino-Americans, and other groups represented. 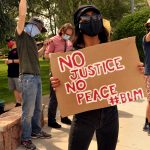 The protest lasted much longer than the three hours originally planned. [Photo by Gayla Wolf]

There were no reports of rioting, looting, assault, or mayhem. There was no destruction of property, nor was there an Antifa group arriving by bus from parts unknown reported that had been ridiculously posted on several Facebook sites. 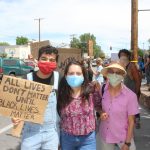 Eighteen-year-old Jennifer Velazquez, a 2019 graduate of Bishop Union High School, asked what she thought of the protest, said, “This is really great! I was skeptical at first and had not decided to attend until I heard about the threats made and that it had been cancelled because of it. This was my only opportunity to show my support of Black Lives Matter.” She was joined by fellow graduate, Josh Santana, and fellow protester, Sara Steck. 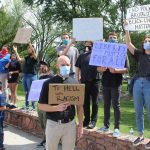 Youth Pastor/Assistant to the Pastor at Oasis of Grace Foursquare Church, Jeremiah Girard and Fr. Cam Lemons of the St. Timothy’s Anglican Church, who also brought his daughter, Grace, attended the protest to” speak out against racism.” 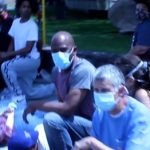 Darrell Spearman, a 52-year-old African American from Memphis, Tenn., told Sierra Wave that he was really impressed with what he was witnessing while here in California. “It’s impressive to see all these young people standing up for justice and an end to racism. It’s truly amazing.”

Local law enforcement kept a discreet presence. Both the police chief in the City of Bishop and the Town of Mammoth Lakes released statements on their departments’ policies on the use of equipment, such as cameras, etc. and types of training and procedures used by the departments to reassure the public that they will protect the rights of all citizens to protest without fear for their safety, as well as the safety of everyone in the community.

It was a video showing Minneapolis Police Officer, Derek Chauvin, kneeling on the neck of a black man, later identified as George Floyd, who was killed after the officer ignored the victim’s recorded and repeated pleas to “Please, please, please, I can’t breathe” that created the circumstances now being witnessed across the country. Three other police officers looked on and did nothing, which outraged the country, including police, and spurred the Black Lives Matter protests. Chauvin has been charged with 2nd-degree murder and the other three officers have been charged with aiding and abetting 2nd-degree murder.

The outrage has resulted in over a week of rioting, looting, injuries and even deaths of some protesters and police officers across the country. It has placed law enforcement in the very awkward position of having their primary purpose, which is to protect lives and property, while also trying to protect their communities while respecting the constitutional right of the people to assemble and protest.

Young black men have a clear stake in seeing police reform. His life may well depend on it.

The right to protest is protected by both the U.S. Constitution and many state constitutions, and state and federal laws.  The First Amendment of the U.S. Constitution states that “Congress shall make no law … abridging the freedom of speech, or of the press; or the right of the people peaceably to assemble.

On the other hand, it is generally recognized that one of the most important rights any citizen should have is the right to live…and breathe.

The Minneapolis police arrest video outraged most of the country, including most police officers, and has spurred protests and marches across the country over the past week. Sadly, many of the marches in larger, major cities, have resulted in rioting, looting, destruction of property. More importantly, citizens exercising their civil right to protest, and the very police officers charged with protecting them, are being harmed and, in some instances, killed. 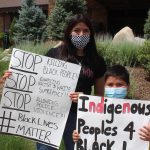 African Americans are not the only ones concerned about abuse from those in authority.

Tuesday’s protest was not an anti-America rally nor an anti-police rally. And nor was it a group of outsider agitators, such as “Antifa” members, or looters intent on destruction bused in from other areas of the state as some unscrupulous posts on local social media attempted to portray it.

Bishop and the other communities of the Eastern Sierra are not seething hotbeds of social malcontent ready to explode into social unrest and violence or allow outsiders to come into the area and harm our environment and communities. That is just not who we are.

Racism is the belief that groups of humans possess different behavioral traits corresponding to physical appearance and can be divided based on the superiority of one race over another. Wikipedia. Pretty open.

You have a long list of races and ethnicities listed in your story. How did you compile this list? I hope to god you didn’t just assume the race and ethnicities of the protestors based upon physical appearance.

FishinDay395
Reply to  Woke One

Woke One, Seems to me you’re just fishing for something negative and unfounded to post about this well written article of the event. I think if anyone’s assuming something it’s you. Let’s leave the trolling to Facebook Great article Charles thank you for covering this story well. There are many… Read more »

Woke One
Reply to  FishinDay395

I’m just doing my best to fulfill my duty to call out racism whenever I see it. If Charles James assumed peoples’ ethnicities or race based upon physical appearance, that is racist and bigoted and we all must demand he be fired. That how it works nowadays. Where have you… Read more »

Philip Anaya
Reply to  Woke One

Last time I checked, the guy in the mirror was a white privileged old man. As a kid, Pop used to pinch my face and say “que lindo muchacho, viejo feo” , yep Hispanic tambien. Thank you all to the participants in the Bishop Black Lives Matter demonstration. You make… Read more »

PS: you should get educated about what racism IS, before you “fulfill your duty to call it out.”

It is great to see people practice their constitutional right to protest. Just as long as it doesn’t cross that line. Law and order every time.I notice it’s OK to protest and violate social distancing so why don’t you guys start opening up lodging up there now. Just saying!

Cheers to our future.

As an older white guy, who has and continues to learn more all the time about the truth of how self-evident Black Lives Matter is, the spirit moves me, and therefore I ask others like me-“when was the last time I (you) invited a family, couple, individual of color over… Read more »

A
Reply to  George Ellis

What are you a unicorn? You just don’t invite strangers to your house weirdo.

Well, if all POC are strangers to you then maybe that might be part of the problem.

I’m glad there are people here with enough guts to show what they believe in. If this isn’t living in total fear and intimidation in our free country, I don’t know what else could be!

Hopefully, along with their hearts full of addressing social justice, with law enforcement professionals, the protestors getting rid of the illegal drug use in our community is also on the Agenda of social justice.

The Bishop Community can be proud of the young who stepped in and expressed their civic and democratic values. As I read about the event, it occurs to me that this is the graduating Seniors real-world Graduation Ceremony. A good moment for them and the community.

Thank you, protestors. And if you haven’t already, register to vote!

Vote and consider running for a political office. Right now we need people with a strong moral compass and those that can face fear with courage, empathy and compassion, not blustering cowardice, as leaders. Thankfully those are attributes that are on display in these younger people.

a resounding YES! please register to vote and then go to your polling place and cast your ballot.