By News Staff on December 3, 2018 in General Misc. Stories

Bishop resident has had 18 eye surgeries in past 5 years

“The only disability in life is a bad attitude.” – quote from Scott Hamilton, 1984 U.S. Olympic Gold Medalist Skater.

Hamilton was born with a congenital brain tumor which stunted his physical growth as a child and yet he achieved great success. He would undoubtedly be very impressed with the “remarkably positive attitude,” coupled with a sense of grace and humor shown by Bishop resident, Mollie Scott, who has faced 18 eye operations to save the eyesight in her left eye over the past five years. 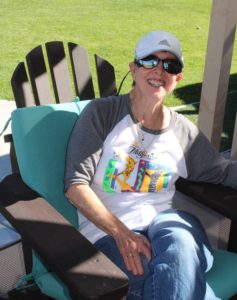 Born in La Cañada, Calif., with cataracts and legally blind in her right eye, Mollie grew up facing challenges her entire life. Yet she will tell you that—up until seven years ago—she has led a remarkably “charmed and fulfilling life” that has included loving, supportive parents, siblings and the love of her life, late-husband Jeffrey Scott, who she met while attending college at UC San Diego where he was doing electrical work. Scott was a local contractor and respected watercolorist who died unexpectedly in 2009 at the age of only 58.

Within a span of five years, Mollie lost both her husband and her parents, who had been living with them in Bishop. And then, two years later she would confront a life-changing threat to the eyesight in her left eye.

“I began to experience a very sharp pain in my left eye. It felt like someone was hammering a nail into my eye. It was so intense that I would get very sick and literally have to lie down,” she says.

Mollie was diagnosed with acute angle closure glaucoma, a very rare form of glaucoma that can present a sudden and rapid increase of intraocular pressure (IOP) within the eye which can destroy the optic nerve, resulting in permanent blindness.

Acute angle closure glaucoma results from channels in the eye that regulate pressure to becoming blocked and no longer draining fluid within the eye normally. Its symptoms may involve severe eye pain, blurred vision, mid-dilated pupil, redness of the eye, and nausea. According to medical literature, while Asians are most susceptible to this rare condition, it is also more common in women.

Very small drainage tubes have been surgically implanted in Mollie’s left eye over the past several years to help regulate the pressure inside her left eye.

According to Mollie, “Over the course of seven (almost eight) years, I have had to fight eye infections using a solution every two hours that cause “intense acid-like burning” in her eye.

She has had patch graft surgery to cover the tubes placed inside her eye as they fail and have had to be replaced because the body rejects them and pushes them out. She takes an optical steroid to slow down any rejection. Mollie wears glasses and currently has three tubes implanted in her eye.

Over the course of her treatment, she has had a vitrectomy (removal of the vitreous fluid in her eye) in which the vitreous fluid is replaced with a saline solution. She has also had one partial-corneal implant which would fail, and then two more complete corneal transplants. Her last eye surgery was in March.

If this all sounds exhausting … and costly – it is. When the eye problem first began, Blue Cross cancelled her insurance. Mollie had to pay thousands of dollars out-of-pocket. Eventually, she would become eligible for Medicare, which greatly improved her finances.

She recently attended a two-week training through the Society for the Blind’s Senior IMPACT Project retreat in which she learned how to better cope with her vision impairment. Mollie came back feeling “more empowerment” and learned “how to live my life more independently.” She has only high praise for Society for the Blind and encourages others to donate to them.

Mollie also has very high praise for the UCLA Doheny Eye Institute located in Pasadena, Calif. She credits Dr. Vikas Chopra and Dr. Hugo Hsu for saving her eyesight. “They are incredible!” she enthusiastically notes, “… as is the entire medical staff at the Institute!”

The most impressive thing about Mollie Scott is not her eighteen eye surgeries as much as her “positive attitude” and resilience. She admits that sometimes she has despaired, but rather than become “discouraged and losing faith,” she says that she “has chosen knowledge over acceptance.”

Perhaps the best way to leave this story about this remarkable woman is with a humorous quote from Herm Albright in Reader’s Digest, June 1995:

“A positive attitude may not solve all your problems, but it will annoy enough people to make it worth the effort.”

Mollie is one of my role models! Not only is she a dear friend, she’s the embodiment of resilience and joy. Mollie is very colorful, intelligent and funny. I wish there were more people like her in this world. Love her dearly!

That’s my dear friend Mollie there! Such an incredible positive attitude! Love her to pieces!

“When the eye problem first began, Blue Cross cancelled her insurance.” That says it all.