By News Staff on February 26, 2013 in Government Agencies/Utilities 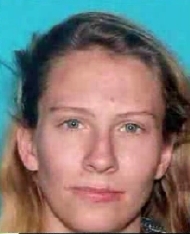 Monday and Tuesday, Inyo Sheriff and Bishop Police officers were on the look out for a 25-year-old Bishop woman wanted for stabbing and beating an 80-year-old woman in the Riverside area.  Shannon Lynn Jones didn’t make it back to Inyo.  Police arrested her in Riverside County for a  string of alleged crimes including attempted murder, home invasion,  robbery, burglary, animal cruelty and vehicle theft. Last fall Jones had been booked at the Inyo Sheriff’s Office for felony battery, resisting a police officer and disturbing the peace.

According to KTLA news, at 6am Monday a call went in to Riverside Police that a young woman was hiding in a shed in the Meadows Mobile Home Park rambling that someone was trying to kill her.  Reports said she left her purse and ID at that scene. Then at 6:30am, a couple in the same mobile home park called to report that they found a woman sitting in their living room wearing surgical gloves and a construction hat with a kitchen knife at her feet.  They said they later discovered that she had stabbed their dog.  Some reports said that the woman, believed to be Shannon Jones, told the couple that her husband was trying to kill her.

Around 8am Monday, another caller said they heard a neighbor moaning inside her mobile home.  Authorities said they found a woman beaten and stabbed.  Her 1995 Camry had also been stolen.  The woman was hospitalized and reported in critical but stable condition.  Riverside Police issued a bulletin and specifically contacted the Inyo Sheriff’s Department and Bishop Police to be on the look out for Shannon Jones. Bishop Police said they had assisted Inyo Sheriff’s Officers in a local incident.  Both agencies expected Jones might show up in Inyo.

Although that might help, but there are plenty of kids or adults out there that were raised with God in there life and are in the same situation. Remember, we all have free will and will do with it what we will.

maybe if she had god and parents that gave a damb,shed be a better person

ferdinand .. sometimes that doesn’t matter either bro …. sometimes it helps to keep people from it .. you never know what the individual will do. So sad!

Perfect example of where the resources should be spent! But no people want to keep the status quo, where law enforcement waste time on ridiculous violations they came up with. I mean if they are gonna go after drugs go after the hardcore ones! Not to mention law enforcement has… Read more »

Desert Tortoise…and not to mention stabbing and beating the woman….and then stealing her car and wrecking it…and I think the reports say the victim was 80 years old.With all those charges brought against her,if convicted,doubt she’ll be back in the High Sierras’ for a really long time.

The sores on her face are called “speed bumps” . They will be on her arms as well. In another year or two she will need new teeth.

Meth has ruined SO MANY

Stabbed a dog. Now that is low indeed.

What about stabbing an 80 year old lady, thats like stabbing a child. Thats darn low.

Often I find I like dogs more than people. I have said many times that if there are no dogs in Heaven I don’t want to go there. Let me rest with dogs, they are better and more true friends than most humans.

You got that right Big Rick. Meth and/ or all those legal pharmaceuticals up here.They probably played a part in most of the crazy things happening to our youth up here. I feel the need to add, I’m all for legalizing pot and lowering the drinking age to 18, but… Read more »

It is insidious. Her face is a dead giveaway of her addiction. Meth takes hold, then it takes everything. The easiest way to kick meth is never to start, and that advice cannot be given too often to the young. The schools show horrific traffic scenes to prevent DUIs, maybe… Read more »

There’s a look isn’t there

I hear ya Big Rick … you can see the ravage on her face. So sad .. what this does to people. She looks familiar though .. but hard to say .. as from what I have seen of this first hand with people who get cracked out, you almost… Read more »