By News Staff on May 1, 2019 in Entertainment/Local Events/Activities, General Misc. Stories, Public Event

What would a presentation about the Bishop Theater be without a movie? 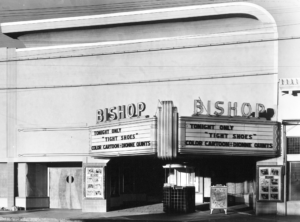 In a word, “incomplete.” Both will be on hand when members of the Holland family come to the Eastern California Museum on Saturday, May 4 from 1 to 3p.m. to sign copies of their recent book, “Bishop Theater: Harry Holland’s Dream.” Part of the program will be a presentation of a short, 1931 silent movie, “The Film Of All Ages,” featuring great early footage of Bishop. On hand for the presentation and film screening will be Howard Holland, Arlene Morris, Katie Bird and Kyle Holland.

The family took on the task of presenting patriarch Harry’s colorful life story, and as noted in the forward of the book, “Patching together a sense of who Harry Holland was … has been a family quest every bit as complex and colorful as the character whose story we have attempted to tell.” 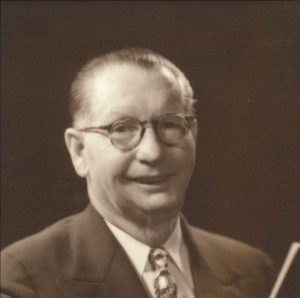 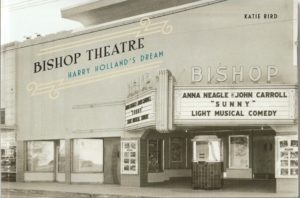 Like many theatrical lives, Harry’s started out wrapped in mystery. Born in England in 1882, Harry eventually found himself an orphan in Texas as a young boy. He and his brother got work as ranch hands, and then worked a sheep ranch in Wyoming. It was there that Harry got a taste of show business from traveling “entertainments.” He decided he liked show business better than herding sheep, and joined circus sideshows as a ventriloquist, magician and juggler.

The show traveled throughout the West, and made the trek to the Owens Valley. Harry decided Bishop was where he wanted to settle.

After working in the Bishop Opera House for a time, Harry bought projection equipment and opened the Gem Theater on Main Street. Local ministers were hostile, especially when they found out their parishioners were enjoying the “moving pictures” on Sunday. Egad. 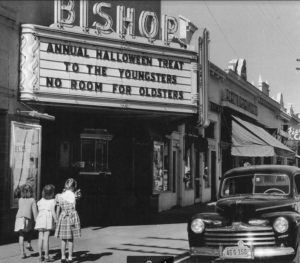 In 1911, Harry took over as manager of the Bishop Opera House (the site of current Masonic Hall) and hosted parties, vaudeville shows, dances and movies. In 1924, the Opera House burned down, but Harry was not deterred. He moved quickly to secure a Main Street location for his Bishop Theater.

Harry was also busy documenting life in the area on film. The result, “The Film Of All Ages,” is a 20-minute, black and white montage of film Harry shot and acquired. The short film “offers an otherwise lost look at the daily lives of Owens Valley residents circa 1915 through roughly 1930.” It includes footage of schools and school children, local scenery, Bishop’s Main Street, bronc riding, the Slim Princess steam engine pulling into Laws Depot and other scenes of Bishop life in the early 1900s.

The restored version of the short film will be shown during the presentation on Saturday.

With the Bishop Theater as an anchor, the Holland family embarked on decades of providing entertainment for Bishop and the Owens Valley. The theater was expanded and upgraded over the years, with the improvements in 1948 being the most extensive. Harry passed away in 1950, and as the Inyo Register obituary noted, “Bishop is a far better place today because Harry Holland lived here.”

To help with planning, and to make sure there is enough popcorn, it would be helpful if those planning to attend would call the museum with an RSVP to 760-878-0258. The Holland family will also be singing copies of the book, Bishop Theater, Harry Holland’s Dream, as part of their presentation, from 1-3 p.m., May 4, at the Eastern California Museum,155 N. Grant St. in Independence.