By News Staff on November 15, 2012 in Government Agencies/Utilities

During the first half of a blowout win against Rosamond, one of the top players for the Bishop Union High School football team came off the field after another Bronco touchdown, and said, “This is a boring game.” 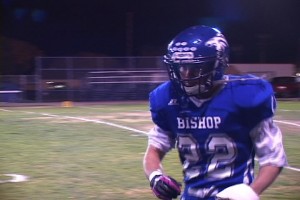 He likely won’t be saying that Friday night when the Broncos play at Salesian.

The Broncos put on a dominating offensive performance in a 49-7 win over visiting Desert Christian (Lancaster) in the first round of the CIF-SS Northeast Division playoffs last Friday at John Schwab Field, but Bishop will face another high-quality offense in this Friday’s second round, traveling to Los Angeles to face the Salesian Mustangs.

Salesian is seeded fourth in the Northeast Division, is 10-1 overall and went 4-0 in winning the Santa Fe League. The Mustangs have outscored their last five opponents 287-17, including last week’s 74-7 first-round win over visiting Capistrano Valley Christian.

But Salesian will have to stop head coach Bill Egan’s Broncos (9-2, 5-0)  and its many offensive standouts, including Ryan Devore, who had 277 yards of offense on just six touches in the win over Desert Christian.

And that Bishop defense will be tested by Salesian, a team loaded with talent at the skill positions.