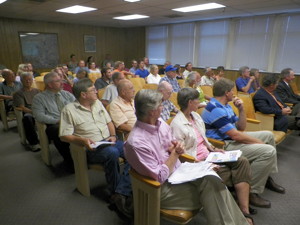 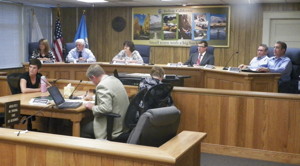 own building on the Wye Road parcel owned by Joseph Enterprises were clearly skeptical about the proposal. This meeting was much better attended than the others in Independence and Lone Pine and it had many more speakers expressing doubts on whether or not it is a good idea.

Many questioned the county’s efforts to seriously and aggressively look into alternatives to the new county building. Once again, Deputy Public Works Director Jim Tatum provided a 56-slide Power Point presentation. County Administrative Officer Kevin Carunchio started by giving the background and history on previous proposals to build a new county building in Bishop going back 20 years. Tatum gave the rest of the presentation and then the public had a chance to respond.

There were some speakers in support of the idea, but they seemed outnumbered by those expressing doubt or outright opposition to the idea. Most questioned the county’s lack of aggressive efforts into less expensive alternatives such as use of the former Kmart or Cottonwood Plaza site, and its lack of even looking into the prospect of eminent domain which gives government the power to take private property, paying fair market value, for public, civic use, or economic development.

The $27,000 a month lease by Vons has kept the former Kmart from getting into the hands of other grocery outlets that might give them competition and apparently efforts to discuss the purchase of Cottonwood Plaza with the new owner has not been considered.

Bishop resident Bob Griffith refurbishes buildings for a living. He did not feel that the county had done a very good job of exploring the possibility of using eminent domain for the 50,000-plus square foot, twenty-year-old Kmart building that has been sitting empty for years. Larger than the proposed new building, Griffith pointed out that there was already plenty of parking available. He also feels that the Kmart building would be a better and less-expensive option to building a new county building.

The former Kmart building is currently assessed at $5.1 million on the county’s tax roll. When 5th District Supervisor Matt Kingsley asked Griffith if he had had spoken to anyone with the City of Bishop about the possibility of using eminent domain to take over the building, Griffith said that he had not. However, it seemed obvious to many that it should be the county talking to the City of Bishop and not a private citizen.

The fact that two county departments, the “One-Stop Career Center” and Probation Department already locate on the former Kmart property, and have had extensive retrofitting provided through County expense and resources according to CAO Carunchio, would seem to add additional weight to the argument for use of the former Kmart building. However, Carunchio gave numbers for retrofitting the building that purportedly was much higher than building a completely new building. No supporting documentation was available to back up the claim, but Carunchio also said that when the county contacted the building’s owners last November, they were not interested in selling it.

Gayle Costello of Bishop felt the new building was a good idea, but also said that she only goes to one county office for a service at a time and she doesn’t think that it matters that all the county services be in the same building. She hoped that the county would explore every option, including use of the former Kmart building. Fourth District Supervisor Mark Tillemans added that he “knew there are plenty of vacant buildings in Big Pine and Bishop that could be used for county offices.”

One of the most interesting speakers was Jerry Core, the owner of a building currently rented to the District Attorney. He asked, “Has the county ever thought of asking building owners to reduce the rents, or the county lower the property tax so that the savings could be passed on to the county in lower rent?”

Core said that he once told a county assessor, “If you lower my taxes, I’ll lower my rent to the county!” He also wondered if the county had ever bothered to ask current building owners if they would sell their buildings to the county. It did not appear that this has ever been done.

The situation, said Ed Pittman, reminded him of the Forest Service move 12 years ago to their new building. “We chased all the same rabbits that the county has pursued” and “playing musical chairs with buildings is a drain on morale and wasted energy.” He said that “If the new building is approved, everyone, both county employees and the public, will be a lot happier three years from now.”

Bill Mitchell has a “nagging concern” that the new building will only result in more empty buildings and office space in Bishop. He noted that “there are already a lot of empty storefronts in town.” He asked why Kmart and Cottonwood have not been aggressively approached to sell and why the county ever allowed itself to be put itself in the position that it says it finds itself. He wondered, “Why, if there is no competition in the Bishop Rental market with all the empty office space, would rental costs keep going up?” In other words, it’s a buyer’s market and is likely to remain so.

Second District Supervisor Jeff Griffiths asked Carunchio to clarify the “exclusive agreement” with Joseph Enterprises. He explained that $10,000 for a bond has been returned to Joseph Enterprises as they have demonstrated “good faith” under the agreement. At this point forward, the county has what is essentially a “gentleman’s agreement”. He explained the lack of looking at other options, saying, “The County has reached out to local property owners several times in recent years but the county, being in an exclusive negotiation agreement with Joseph Enterprises, cannot pursue other entities while the agreement is in effect.”

Sue Stoutenberg, a 15-year county employee worked out of the county-owned South Street building for many years and said that she is “Very much in favor of a new space.” “The South Street building is outdated, not ADA compliant, there is no privacy, and heating and cooling is always a problem.” She also responded to  concerns previously voiced at other public meetings about the public in a consolidated building being unnecessarily exposed to communicable disease, saying that “exposure of the general public to infection should not be a concern if the health clinic were to be relocated to the new county building.”

Charles Milligan felt the county should invest some money in the South Street building, and Skandar Reid went further, advocating that the building be razed and replaced with modular units. The idea was well-received by many in the audience.

Dan Stone, President of the Owens Valley Contractor and Vendors Association said that he was more “positive than most here tonight” and “business is improving, and the cost of money is unlikely to be lower.”

Ken Puls suggested that the county “look into hiring someone really savvy at negotiating to approach owners to sell property to the county.” Puls went on to say, “I don’t want our kids to be put in debt.”

Daris Moxley suggested that the issue of building a new county facility be “put to a public vote.”  Another speaker said that he felt Main Street should be used only for retail businesses and not government offices. Another expressed concern over “blight” from “all the empty buildings on Main Street” and concern over “costs overruns”. He noted that the Northern Inyo Hospital ended up costing almost three times the initial cost and feared it would happen to the new proposed building as well.

Shirley Fendon tried hard to understand the county presentation, but said her eyes were really opened by comments made by Bob Griffith’s and Jerry Core’s comments. As a result, she feels the County is “rushing into this and we really need to sleep on it.” She also agreed that it should be put to a vote by the public.

Russ Aldridge, a 4th District Supervisor candidate in the last election, reminded the board, “I fought against the building then and still feel the same way. I believe that incurring debt is a burden on us and our children.” By contrast, Chuck Kilpatrick spoke stating that he felt that “in 20 years it will be paid off and it will be a ‘gift’ to our children.”

After closing remarks from the supervisors, everyone was reminded that no final decisions have been made and that the list of concerns from citizens expressed this night and at other meetings will be carefully considered and addressed.

The Board will announce another meeting in the future to bring together all the comments made at the public meetings to provide answers and for further discussion.

“Carunchio also said that when the county contacted the building’s owners last November, they were not interested in selling it.” I wonder how many locals actually have checked the facts that were presented and made calls to the building owners or listing brokers for the Old Kmart property, my guess… Read more »

Thanks for checking, Benett. Glad to know your not just taking their word.

I think the Kmart building would be a viable site for the county facilities; however, Von’s is holding our community hostage and has for years. Why would the owners of Kmart sell to the county or a competitor when they get $27,000 (dollars) a month?

Most of us working folks could not attend these meetings to voice our opinions as we are busy putting food on the table. It is obvious that business owners including those in the rental business were in attendance, and were against the idea of a new building because they currently… Read more »

Desert Artesian
Reply to  Joe B.

A new site is in the works for people just like you. “Working Folks”. Give it a look and join in. OurLocalTopics.com

Russ aldridge
Reply to  Joe B.

When you get your property tax raised or sales tax goes up or business taxes go up to pay for this new please you can just pay my part .

Mr. Aldridge, taxes are going to go up regardless. I know that you are a business man, however you should note that if we continue to pay rent for years to come, then taxes will continue to go up and the rate of inflation will naturally increase rent prices. At… Read more »