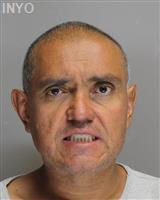 Deputies responded and were unable to locate anything suspicious. At 5:00am Dispatch received another report of shots fired and a power outage; deputies returned to the area and discovered a downed power line that had sparked a small fire on the 200 block of Tu-Su Lane. At approximately 6:45 while CHP and deputies were on scene they heard several shots coming from a residence on Tu-Su Lane.
The Special Enforcement Detail (consisting of Inyo Sheriff, Mono sheriff, Bishop Police, and Olancha Medics) responded to the area, and a CodeRED notification was sent out for residents to shelter in place in the area of West Line to Diaz between Tu-Su Lane and See Vee Lane.
The team surrounded the property and a warrant was obtained for the residence.  At 10:30 the warrant was served and the one person residing in the property was arrested. The suspect was identified as 50 year old Bishop resident Rick Dewey. Dewey was arrested without incident and transported to Inyo County Jail.