The City of Bishop is taking a second, serious look at an electric car recharging station in the downtown corridor.

Public Works Director Dave Grah highlighted potential sites at Monday’s City Council meeting and got the green light to bring in a consultant to work on location, size and design. 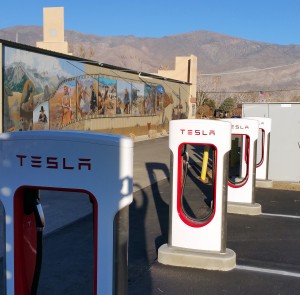 With any luck, the consultant may also be able to hook the city up with a company who would actually do the project. That was the wish of both Grah and Councilmember Joe Pecsi.

Grah honed in on four of the city’s parking lots.

In an e-mail, Grah stated three to five spaces would be a reasonable start, “but I think a consultant would probably be much better forecasting demand.”

The City rejected the idea of a Tesla station roughly seven years ago. Since then, recharging stations have popped up in Lone Pine and the town of Mammoth Lakes accommodating a growing number of all-electric or hybrid autos.

Of course they rejected it. Get with the times city of bishop