A traffic stop by Bishop Police led the arrest of the driver and confiscation of a large quantity of marijuana. 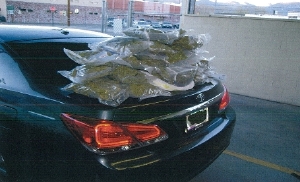 According to Bishop Chief of Police Chris Carter, one of his officers stopped a vehicle. Investigation revealed the driver to be in possession of a “usable quantity of a controlled substance. The officer arrested Rex Hornbaker, 56 of Arizona.

A search of the vehicle by the Bishop Police Department Drug Detection Canine revealed a large quantity of marijuana packaged for distribution, according to the Chief. The passenger was released pending charges. Officers said the couple’s one-year-old son was also in the car. He was released to his mother.

We work to provide daily news to all of the Eastern Sierra, in the tradition of Eastern Sierra News Service and the Sierra Wave. We bring you daily happenings, local politics, crime, government dealings and fun stuff. Please contact us.
View all posts by News Staff →
Bureaucrat Beat: District of Corruption, Walmart law, and tree hugger
MLPD Officer Torres honored by MADD