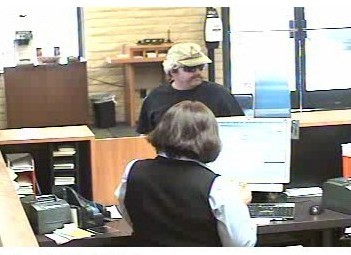 Bishop Police compared this video image from bank surveillance equipment with the security video at Paiute Palace to help identify the suspect.

At a press briefing Friday, Bishop Police Chief Kathleen Sheehan described the man who robbed Chase Bank in Bishop as unemployed, a past methamphetamine user, suicidal and in possession of two hand guns. Chief Sheehan said she called the press conference out of concern for the public. She asks that business and individuals remain very watchful.

An armed robbery warrant for the arrest of 49 year old Steven Craig Wiswell of Benton was approved by the District Attorney and Wanted Posters went out to local banks and other law enforcement agencies.

The Chief feels that Wiswell’s profile could mean an officer-involved shoot-out at some point. Chief Sheehan said that last week she and Lieutenant Chris Carter both got calls that a suicidal, missing person in Mono County was their robbery suspect. They went to work with Mono Sheriff’s officers and Mono Narcotic Enforcement Team members.

The Chief said interviews with friends and neighbors started to build the case in Wiswell’s direction. Questions also revealed that the suspect had watched a television show on bank robberies to learn how to do his own crime.

An image of Wiswell on the Paiute Palace Casino surveillance tape the night of the bank robbery confirmed suspicions. Chief Sheehan told reporters that the suspect was in the Casino on Wednesday, March 17 about 10:40pm to 10:45pm and used his Players Club Card which led to his identification. His name, photo, drivers license and address were in his Players Club registry. We took a look at the Casino video. It appeared to be the same individual as the one on the bank tape. Chief Sheehan said officers noted a remarkable similarity in the pants and boots.

The suspect’s car and motorcycle are still located near his home, but it is believed he could have gone to Minden, Nevada, or Las Vegas. The Chief asks local businesses and citizens to remain very vigilant since Wiswell might return to the Eastern Sierra. The Chief thanked the Inyo Sheriff’s Department, Mono Sheriff’s Department, the Paiute Palace Casino and Bishop Tribe for invaluable cooperation in this case.

We work to provide daily news to all of the Eastern Sierra, in the tradition of Eastern Sierra News Service and the Sierra Wave. We bring you daily happenings, local politics, crime, government dealings and fun stuff. Please contact us.
View all posts by News Staff →
Bureaucrat Beat: Patience, Sob Story, and Government Jobs
National Park Rangers Talk Fires, Fish, and Frogs in Bishop