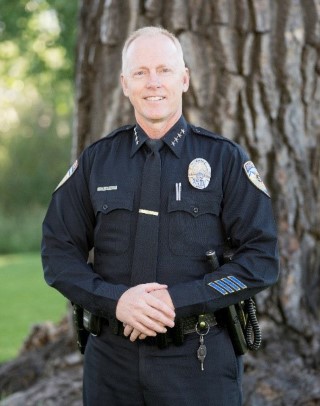 surprising move, Bishop Police Chief Ted Stec has announced his retirement after five years as the head of the Bishop Police Department.

At its meeting of January 11, 2016, the Bishop City Council voted unanimously to appoint Ted Stec as the new Chief of Police.

Chief Stec came to the City of Bishop in late October of 2015 to fill the role of Lieutenant/Acting Chief.

Prior to coming to Bishop, the Chief spent approximately 25 years in law enforcement in Northern California, starting his career as a Police Officer with the City of Red Bluff. He then spent 5 years as a D.A. Investigator for Shasta County before moving on to Suisun City, California in 2006.

Chief Stec was hired by the City of Suisun as part of a team whose mission was to rebuild the Police Department.

During his time in Bishop, Stec and his wife, Dawn, became familiar faces at many community events both in the city and around the county, and supporting many local causes that benefited the community and those in need.

Mayor Laura Smith offered this comment: “The city is grateful to Chief Stec for the stability and positive leadership he brought to the Bishop Police Department. I would like to wish Chief Stec and his wife, Dawn, continued happiness during the next chapter of their lives.” Many agree with Smith’s assessment.

Stec’s leadership style put a polish on the small, but vitally important police department that serves and protects the citizens of Bishop. He will be missed by members of the department and the community at large.