By Deb Murphy on September 24, 2021 in General Misc. Stories 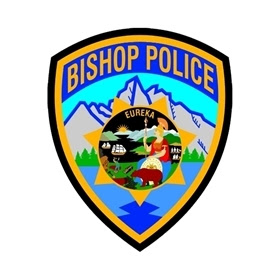 When Bishop flew the police chief job in 2015, then Porterville Police Department Lieutenant Richard Standridge was contacted by recruiters but opted to stay on the west side of the Sierras. He’d just been promoted and was working on his Master’s degree; the timing wasn’t right. “I knew I wanted the job but had things I needed to do first,” he explained.
He had checked out the area, visited on vacations to hike and fish, all the things tourists do. “My concern was whether I could meet expectations, meet my own expectations,” he said. “I want to leave a place better than I found it.”
Fast forward to 2021 when the City went through another recruiting process following the retirement of Ted Stec, the timing was right. Now, he’s close to getting that degree, a pursuit he said “gives you a broader perspective, a more open mind. The more education you have the more you bring to the job,” Standridge said. “Now I can I got the job I truly wanted.”
The timing might also be right for the Bishop community. These are strange times scarred with anger and intolerance that small, rural tourist destinations are not immune to. The beating of a Bishop High School student at Crowley Lake and the widely viewed confrontation between George Barlow and Sheriff’s officers stunned the community. (An investigation of the Barlow incident by Inyo County District Attorney Tom Hardy determined the officers acted appropriately. The Crowley Lake incident is under the prevue of the Mono County Sheriff’s Department.)
“The video (of the student beating) was disturbing,” Standridge said, noting the combination of young kids, alcohol and cell phones. “You have to teach respect for others, to think before you act at a young age.”
Standridge was criticized for taking the video of the Barlow incident off the department’s Facebook page. He did that because of comments he described as hateful. “I knew the people who commented knew each other. You can’t take that stuff back. I was controlling what belongs to the Department. When I took it down, everything attached to it (the comments) came with it. I took the heat.”
“The last few years, there’s been more impatience,” he said. “You see it in the way people drive, how they interact with others. It’s a toxic culture in certain aspects. People are quicker to anger. There’s a lot of good out there, but we can do a better job of being tolerant toward others.”
Standridge has spoken with Bishop Unified School District Superintendent Katie Kolker. Brady Peek is a campus presence as the school resource officer. “He’s doing an outstanding job,” he said. “They see him as a resource, as part of the campus. That helps break the barrier. The kids respect him.” Standridge knows that job well. He was one of the first school resource officer in Porterville and refers to that position as the best job he had, next to his current position.
“As the kids grow up and have their own kids, you can maintain a relationship,” he said. He ran into a former Porterville student who introduced him to his family. This was a student with a less than stellar background. “That’s when you know you’ve made a difference,” Standridge said of that encounter. “You have to share yourself. You can’t just be a uniform and sit in your office. You’ve gotta be a human too.”
He talks about the community tolerance level. “We keep putting tokens in the bucket,” he explains. “The more tokens, the more that tolerance level goes up. If we have an ‘aw shucks’ moment, the level goes down. We want to stay above the line. Some departments can never get back to baseline. That’s part of what’s happening.”
One of Standridge’s projects, post-Covid, is a Citizen Police Academy. Locals do ride-alongs to get to know the department and the officers better. “Everybody loves firemen,” he said, but maybe not so much with police officers. “I want the Bishop PD to be liked and trusted. Along the line, we stopped explaining. There’s a guardian vs. warrior mentality. Now we’re moving back to the guardian mentality. That’s what people want; that’s how they want to be policed.”