Bishop Police Department Chief Chris Carter made it official at Monday’s City Council meeting: he’s going to retire at the end of September. 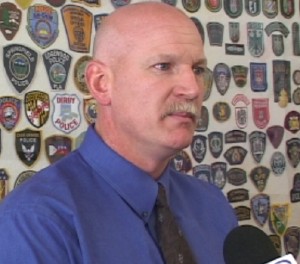 “It’s something I’ve been contemplating for a while,” Carter said in a phone interview. The timing of the announcement, two and a half months before his official exit, was based on convenience, to give the City enough lead time to develop a succession plan. He and his wife plan on staying in Bishop where Carter has served the BPD for 12 years. “After 32 years (in law enforcement), I’m ready to devote time to just living,” he said.

City Councilmember and former BPD chief Joe Pecsi hired Clark, bringing him in as a police officer in 2003. “I envisioned him as a first and second line supervisor,” Pecsi said. Carter moved up the ranks to sergeant, lieutenant then chief in 2010. “He had 18 years in Barstow, had his education. He fit all the criteria. He’s done a fine job as chief. The department looks and acts professional, he’s seen to their equipment needs and training.”

“I’m going to miss the people,” Carter said. “They bust their butts…. I was fortunate to have good people. They provide a great level of service. It’s been a seamless ride.”

In terms of accomplishments during his tenure as chief, Carter said the department was in good standing when he came in; his accomplishment was simply maintaining the same level of professionalism.

Congratulations on dedicating 32 years of your life to a very noble profession. Very few people in this world are willing to endure the rigors of law enforcement from the in depth hiring process, constant scrutiny of both your on-duty performance and off-duty conduct, shift work including weekends and holidays,… Read more »

Instead of spending money for a search of candidates from afar who are waiting there turn to be Police Chief us taxpayers would welcome the idea of just hire within. Just take the next ranking officer make him chief give him the job wait 3-5 yrs till he retires. Rinse… Read more »

NO H20
Reply to  High Water

Not to mention the Huge pay , benefits and pension package for the rest of his/her life.

High Water
Reply to  NO H20

Bazinga! And we the taxpayer are the charitable and VERY GENEROUS CONTRIBUTORS.
Back to the grind taxpayers many more retirement monies need to be collected.

Public employees retire at the same age as those in Greece!
Don’t hate on me haters I’m just the messenger

@High Water: There is NObody in house who meets the qualifications. They HAVE to go outside.

It’s good to hire from the outside, most of the cops on the PD have only worked in the Eastern Sierra’s.

Best of luck in your well deserved retirement, Chris. Trust me, it’s great! You were a great partner on the Eastern Sierra Public Safety team.