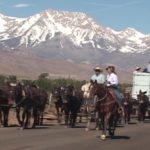 Bishop takes great pride in hosting the Mule Days Parade, one
of the longest-running non-motorized parades in the country. This year’s parade takes place Saturday, May 23rd at 10 a.m. Marching bands, honored guests and community youth organizations
intermingle with dozens of people astride mules and horses to mark the occasion.

Join Bishop residents and out-of-town spectators as they line our sidewalks to enjoy one of this area’s largest celebrations!

Tips for Viewing the Parade
• Arrive early to secure a viewing spot along the route.
• Bishop Mule Days would like to remind attendees that chairs may only be placed along the parade route just prior to the parade. For the safety of pedestrians, cyclists, motorists, and mules, placing and securing chairs along the parade route in advance is not allowed.

Please do not leave chairs unattended, and promptly remove chairs after the parade. (Also tape, ropes or other objects blocking off sidewalks or portion of the roadway is prohibited.)
• Parade participants are reminded that throwing candy or any objects from any entry is prohibited for safety reasons.
• Parade announcers are stationed every couple of blocks along the route.

Copies of the parade lineup are available in the official Mule Days Magazine or The Inyo Register newspaper.
Please note that the lineups are subject to last minute change.
• Our weather can change in an instant. Consult your favorite weather source before heading out and dress appropriately.

Sunscreen, water and a hat to shade your eyes are a must.
Detours & Closures:

Northbound U.S. 395 traffic coming from south of town will be detoured west onto Mandich Street, then north onto Sunland Road to West Line Street. The detour goes west on Line to Barlow Lane, then turns north on Barlow until it ends at U.S. 395 just past the Rite-Aid/Bishop Shopping Center Plaza.

From West Line Street residential areas, motorists will feed into the Southbound U.S. 395 detour detailed above. Again, local residents with a need to be in the downtown area during the parade are encouraged to get into downtown by 9 a.m.

As with every such event, emergency services personnel including ambulance and fire units will be deployed on both the east and west sides of the parade route.

Traffic control will be in place at the Bishop City Park entrance and will be lifted when traffic eases.

Coats Street Closure: To help alleviate parade entry/traffic congestion at the Sierra Street entrance of the Tri-County Fairgrounds, parade entrants will be routed down Sierra to the second gate of the grass parking lot in front of the fairgrounds while cars and foot traffic will be directed down the main paved entry.

As a result, Coats Street at Sierra Street will be closed to southbound traffic until 1 p.m.

To gain access to the fairgrounds prior to 1 p.m. take Home Street north, travel east on West Yaney, cross Coats Street in a northbound direction and enter the fairgrounds. Those needing to leave the fairgrounds from the main entrance will be directed westbound on Sierra Street then onto southbound Home Street.

20-Mule Team Provisions
The size of the 20-Mule Team entry requires some provisions that may effect motorists. The 20 Mule Team will be staged and then escorted by law enforcement from Schober Lane to the start of the parade at South Street. The 20-Mule Team will exit the parade route by continuing past Sierra Street to the Mule Days Office, and re-enter the fairgrounds in the parking area next to the office.

Parade-goers who normally lineup across North Main Street just beyond the Sierra Street turn will be asked to clear the street so the team may pass.