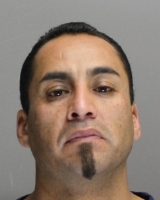 On October 15th, 2013 at 5:30AM Inyo County Sheriff’s Deputies were dispatched to Mahogany Smoked Meat House in Bishop, CA for a burglary that had occurred the evening of the 14th. According to the reporting party, the store had been broken into and a safe was missing. Sheriff’s Investigators were able to identify the suspect utilizing video surveillance from the store’s security system and a “Be on the Lookout” (BOLO) was issued for Eduardo Gallardo, a 37 year old man from Bishop.

Gallardo was located at the residence of Scott Pfuhl in the Chalfant area north of Bishop. Gallardo was taken into custody at approximately 5:30PM, following a brief foot pursuit. A search warrant was issued shortly after 10:00PM for Pfuhl’s property. The safe was recovered; however the contents were not located. This investigation is currently ongoing. If anyone has any information please contact Sheriff’s dispatch at 760-878-0383;or use the “Report a Crime” icon on the Sheriff’s webpage at www.inyocounty.us/so/.

We work to provide daily news to all of the Eastern Sierra, in the tradition of Eastern Sierra News Service and the Sierra Wave. We bring you daily happenings, local politics, crime, government dealings and fun stuff. Please contact us.
View all posts by News Staff →
Back in business, Forest Service advises on firewood and prescribed burns
Kathy Henderson: 1933-2013

53 Responses to Bishop man arrested in connection with local burglary