At approximately 4:30pm Monday afternoon Inyo County Sheriff’s Dispatch received a 911 call regarding shots heard at “Youth with a Mission” apartment/hotel complex on North Sierra Highway (outside of the town of Bishop). 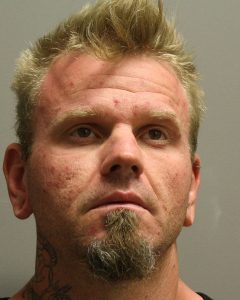 Inyo County Sheriff’s Office, along with Bishop Police Department, CHP, and Bishop Tribal Police responded. Bullet holes were discovered on an exterior door where the gunshots were heard.

quaaaaaaaack…I think what it is,is that many of us moved here to get away from the crime,drugs and low-lifes in the bigger cities….and many kind of take exception to when we see it happening more and more around here…especially lately,or so it seems….instead of the little bummy-crimes where they steal… Read more »

Well,good news for you Bishop residents……looks like this guy is already out and about,back in town and on the streets again,as of September 20th…according to his ranting post on the Inyo County Sheriffs facebook page…from what I could understand,blaming everyone but himself for what happened here….and looks like,if I can… Read more »

Not surprised
Reply to  Low Inyo

What an outrage! This loser should be on his way back to prison, not let out to roam the streets. What the hell is going on here? If this keeps up, one of these days us citizens won’t have a choice but to turn to vigilantism.

quaaaaaaack
Reply to  Not surprised

The countdown for the lynch mob gets shorter every day. Yay residents of Inyo County for your willingness to take matters into your own hands. you’re the real heroes here. Do the people who write the letters about these things spend all day watching old Clint Eastwood movies and thinking… Read more »

@ quaaaaaaack-I’m ready for the “bad guys” to get what’s coming and for the “good guys” to be safe and free of harms way. End of story.

Mary….I have to think there must be more to the incident than you are stating,saying” he was attacked in his own front yard by a meth-addict and defended himself “….if someone comes onto your property and assaults you,and you happen to get the best of the brawl,I’ve never heard of… Read more »

@low Inyo…it happens if you are his family member or close friend and believe very word the addict states. (insert sarcasm here)

That’s not a “prison issued tattoo”. But thanks for the stereotype. Also, your improper use of the apostrophe leaves you open for some lovely stereotypes. Perhaps we should open a forum on that?! Seems just, given what goes on in places like this every day. Unfortunately, yes, he was in… Read more »

The good news appears to be that if you want to get a good old-fashioned lynch mob assembled, this seems to be a good place to do it. But it’s probably more fun and safer to just shoot first.

Lower, this place this happen at was a motel before they purchased it. I’ve never seen any sign of it being converted .

My evaluation of this moron was confirmed after checking his FB page. SOME of his employers’ patrons seem to provide Bishops legal system job security, the security guys there should receive hazardous duty pay and bullet proof vests. Alcohol and drugs will end you, kids, stay away from them if… Read more »

I hear ya,Tinner…..looks like a guy I’d want my kids around if I had them attending Church services and outreach programs,helping to show them the right road to travel….

::Mouth agape:: Okay, I’d like to know how a felon gets his hands on a firearm in this state with it’s severely strict gun and ammo laws? (Ironically proving that only criminals will end up with guns no matter how many laws you make.) Also, is it the same “Youth… Read more »

Lorijellybean, only law abiding citizens obey increased gun laws, not everyone understands that.

“Ironically proving that only criminals will end up with guns no matter how many laws you make.” So what is your solution? No gun laws? Or how about we enforce the existing gun laws? Or maybe rescind the law Congress passed 40 years ago (under pressure from the NRA) that… Read more »

@ Paco, I never said I had a solution, but I think we could dial back on some of these laws like ammo limits, and registering every time ammo is purchased for starters. You ask, “Why not enforce the existing laws we already have?” That’s a great idea! Okay, let’s… Read more »

LJB: You seem to think there are two sets of people, or gun-owners: the law-abiding, and the law-breaking. You don’t seem to consider that these are neither permanent states of being, nor mutually exclusive. And a quick look at George Zimmerman will tell you that the concept of ‘self-protection’ is… Read more »

quaaaaaaack, don’t worry about something until it happens, is that what you’re saying? You gotta be kidding me. That’s like hiking through the PCT and not consider taking a water filter until you get thirsty. Everyone has the right to defend themselves or even be prepared to. Law enforcement cannot… Read more »

@ quaaaaaaack whaddya you squawking about? You know, you asked a very personal question that if we were face to face I would tell you it was none of your business why I feel I need a firearm. I’ve been beaten, raped, robbed, and my life threatened in my past… Read more »

Lorijellybean….There’s not a person in the U.S.of A.,or Inyo County, that couldn’t purchase a pistol ,legally or illegally,in 2 hours if they wanted to…but that doesn’t mean we should all bow down to the NRA and say they are right about gun restrictions not being the answer….if anyone wants to… Read more »

@ Low Inyo you said: “There’s not a person in the U.S.of A.,or Inyo County, that couldn’t purchase a pistol ,legally or illegally,in 2 hours” That would and could only be true if they were obtaining a handgun ILLEGALLY. The law says there’s a 10 day waiting period and a… Read more »

Lorijellybean….plenty of ways to get a pistol or firearm without the waiting period….you don’t think the FFL can get around that ?…..who’s going to turn them in…the guy or girl buying the firearm….another way…facebook and the social network…happens right here in Inyo County,with the “promise” of the purchaser to legally… Read more »

@ Low Inyo If you are so sure this is the case, why aren’t you notifying law enforcement? Or are you literally theorizing this happens (AKA fantasy). Because if you know this is actually taking place somewhere, it’s YOUR duty to report this right away to law enforcement. As I… Read more »

Prison issue neck tattoo’s…never been a big fan. This piece of dirt belongs in LA, not in Bishop.

So the “Youth with a Mission ” is a facility and organization that promotes GOD’s word and his work…..and by title alone,I’m sure activities and probably outings for young people helping to put them on the right path….so what’s a 34 year old felon with a firearm doing living and… Read more »

Its guys like this who make it difficult for employers to hire convicted felons giving somebody that 2nd chance in life that we all deserve. Good for us non felons seeking employment, I guess. This guy will be spending some serious time behind bars and rightly so, the city of… Read more »

Sounds like he is going to find out all about our growing gun control laws. He should be a expert by the time he gets out, agian.

america may want to redifine the definition of freedom.