On March 14, 2015 at 1:26 am, a Bishop Police Officer was in the 400 block of E. Line Street when he heard subjects involved in an argument. The Officer checked on the party in the area and then continued to drive around. 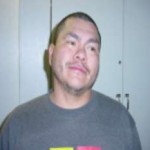 The officer noticed a male subject running and attempted to make contact. The individual; later identified as Kevin Curtis Brown, continued to run from the officer. Additional units responded to assist in the foot pursuit, where Brown was apprehended by officers and taken into custody.

BROWN, Kevin Curtis was arrested for 69 PC-Obstruction/Resisting a Peace Officer; 243(d) PC-Battery with
great bodily injury; 1203.2/F PC-Felony Probation Violation; 11377(a) HS-Possession of a controlled substance; and 836.6(a) PC-Escape from custody police agency or police officer. BROWN was transported to the Inyo County Jail and is currently awaiting arraignment.

The Bishop Police Department would like to thank the Inyo County Sheriff’s Department for their assistance in this case.

I hope this person does not have offspring.

I hope brown takes his lawyer with him!!!! Meth addiction is no joke….

I hope this person does not have offspring.

Steve,
That is a horrible statement. What if Mr. Brown does have kids? Do you think voicing your hopes of their non existence makes any of this better? Shame, shame too bad we don’t know your name.

Vanessa, I’ve told you over and over again, you can’t argue with stupid ! Love Mom

Felony Probation Violation…OUCH! bye bye Brown. I haven’t always been the most law abiding citizen, I think if I had to name one thing that I thought helped me change my ways was the food they serve in jail and my love of Mexican food…I guess that’s two things but… Read more »

Tinner…jail food is SUPPOSED to be bad. Believe it or not, they (the jail) don’t WANT you to come back. Nothing would make those custody deputies happier than an empty jail.