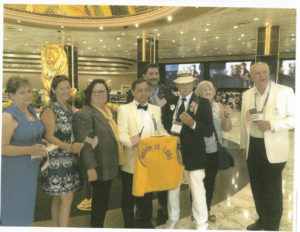 A wonderful story has taken just over a year to unfold, involving the Bishop (CA-USA) Lions Club and the federation of Lions Clubs in Budapest, Hungary.  Key to the story is the fact that a unique art and cultural Hungarian history book was saved from destruction during the Hungarian Revolution by the family of Bishop Lion Kazmer Simon.

The book was brought with the fleeing family originally to New York, then Boston, then West Los Angeles and eventually to Bishop with survivor, “Simon Simon”, as he became known to the local Lions.

In the early spring of 2017, Simon brought the book to the office of fellow Lion Stan Smith, and suggested that they return the book to Hungary for its historic value.  The two initially tried the Hungarian Embassy in New York and the consulate in Los Angeles, thinking a diplomatic avenue might  be the best to courier the book back home.  Running into diplomatic and government red tape, the two asked “Why not use Lions International to get the book back home?”

As luck would have it, 2017 was the 100th International Convention for Lions in Chicago, and District 4-L1 Governor Steven Morgan was planning on attending the convention.  Simon and Smith asked Governor Steven to carry the book with him and, by prearrangement, meet with the Budapest Lions also attending and transfer the book to the Hungarians for the return trip to either the Hungarian National Museum or National Library.  So, as part of Lions International’s 100th celebration, that transfer was accomplished and the book headed home.

That was not the end of the story, however.

Bishop Lion Smith had been selected to be District 4-L1’s Sierra Region Zone and Region Chair and, as such, planned to attend the 101st International Lions Convention in Las Vegas, and asked Lion Simon to make the trip to meet the Budapest Lions who had made the book’s return certain.  Those best plans went a bit awry when 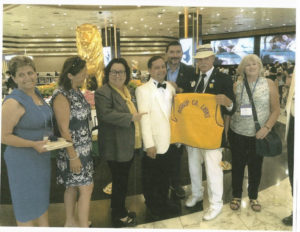 Budapest Lion Mihaly Kokeny was unable to attend in Las Vegas due to a lack of proper visa approval, and Lion Simon crashed his car in the Nevada desert on the way to Las Vegas and he was carrying Bishop Lions Club’s banners and pins for presentation to the Budapest Lions.

However, fortune struck from disaster.  Lion Smith and wife Lion Barbara were carrying other Lion items with them which were to be part of the joint presentation along with Simon’s memorabilia, now missing in action.  So, under the watchful eyes of the MGM Grand Hotels’ proud Lion, a cheerful swap of Lions pins and banners and vests and badges took place at the 101st Lions International Convention. 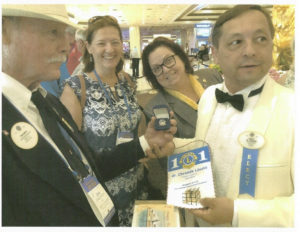 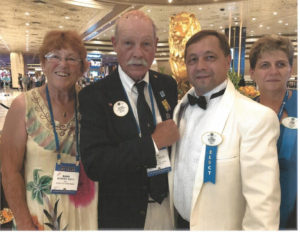 A roaring MGM Grand Hotel Lion looks over the fun at the 101st Lions International Convention in Las Vegas this past summer, while Bishop Lion and Club Secretary Barbara Smith smiles her approval for husband Stan greeting Budapest District Governor Dr. Laszlo Chrabak and his wife.

The group of Hungarian and American Lions got even bigger when the American flags rolled out, along with the Bishop CA club vest, which was given to the Budapest delegation as a token of thanks from Simon for their part in the return of the history book to the Hungarian National Museum.

A very solemn ceremony was held in Budapest during which the art and history book was delivered to the Hungarian National Museum through the auspices of the Budapest Lions Association, courtesy of Mihaly Kokeny, District Governor Laszlo Chrabak and Vice District Governor Gusztav Boronkay.  The book, back home at last, is now resting where it has long belonged on that Hungarian shelf. 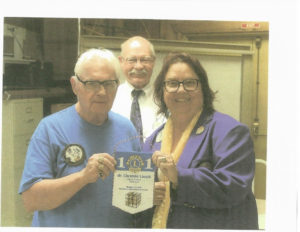 Since Bishop CA/USA Lion Kazmer “Simon Simon” Simon could not attend the 101st Lions International Convention is Las Vegas this past summer due to that auto accident, he was surprised by a special visitation from Lions District 4-L1 Governor Sondra Tersigni at the Bishop Lions Club where he was presented with the unique Budapest club banner honoring District Governor Dr. Laszlo Chrabak.

A tour of LORP, ending at ‘The Islands’
Connie Englehardt passes away at age 73