Friday evening, the Bishop Fire Department received a call of a structure fire on Sycamore St. west of the Fairgrounds. 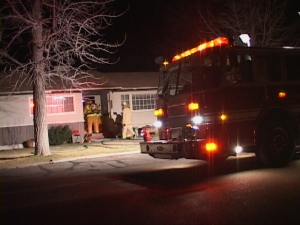 The report was at the home of Northern Inyo Hospital Administrator John Halfen. Bishop Fire Chief Ray Seguine said Mrs. Halfen told firemen that the wall in their home was warm to the touch and they heard crackling.

Firemen made the decision, the Chief said, to go through the wall on the porch of the home. Chief Seguine said they found that wire used to hold insulation in the wall had interacted with an electrical line to a porch light and caused it to short out, heating up an expanse of the insulation wire.

Damage to the home, according to the Fire Chief, was limited to the front porch area where firemen removed the outer wall to get at the source of the problem.

We work to provide daily news to all of the Eastern Sierra, in the tradition of Eastern Sierra News Service and the Sierra Wave. We bring you daily happenings, local politics, crime, government dealings and fun stuff. Please contact us.
View all posts by News Staff →
Mammoth Mayor may bring medical marijuana tax back for talk
Suicide attempt averted by law enforcement, agencies in Bishop