By News Staff on November 5, 2014 in Government Agencies/Utilities 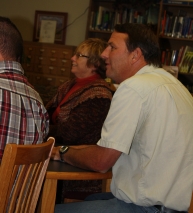 Tuesday evening’s meeting of the Bishop Creek Water Association was a mix of good and bad news.

Due to the finances of an association struggling to make improvements in its water delivery system and facing the prospect of raising association dues, there will be no Christmas party this year. That was the bad news delivered by board president Steve Stevens but balanced by the fact that the 900-plus residents may have at least wet ditches for Christmas.

The issue of water in the ditches went beyond aesthetics this time last year. In addition to erratic stock water delivery and dead fish, shallow domestic wells went dry in December and when the water came back in the spring, residents on the west side of the developments along South Barlow had flooded basements and crawl spaces. Over the last nine months, the association has been working with Southern California Edison and the Los Angeles Department of Water and Power to guarantee enough water stored at Lake Sabrina to supplement the natural flow from Bishop Creek drainage through the winter.

During the summer of 2013, the second consecutive drought year, both Sabrina and South lakes were drained to historic lows; both were reduced to their pre-dam, natural lake beds. Flows out of the drainage are governed by the 1922 Chandler Decree; LADWP held Edison to the 106 cfs flows at the height of the summer. This year, Edison opted to go with the decree’s clause that allows the utility to release water in the amount that would flow had no dams been built, or roughly 75 cfs. 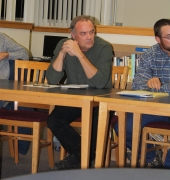 BCWA board member tries to figure out how to distribute creek flows.

With 3,000 acre feet in Lake Sabrina as of October 1, Edison will supplement the natural flows with 12 cfs through the end of the year, allowing 30 to 35 cfs to flow through West Bishop – not enough to deliver water to all of the residents all of the time, but, hopefully, enough for an equitable distribution, enough to avoid some of the 2013 issues.

“It was the best use of the water from our perspective,” Dan Golden of Edison told association members.

Now board member Rock Baker is figuring out how to equitably distribute the water. “It’s like pinning Jello to the wall,” he said referring to the fluctuation in flows out of Edison’s Plant 6. Baker’s task is to come up with a rotation system, moving water from McLaren to the homes west of South Barlow and those east of South Barlow according to a defined schedule. But the water and weather haven’t cooperated. According to board consultant and retired Edison employee Burt Almond, as the temperatures drop at the higher elevations, water freezes. Since ice does not flow, the water out of the drainage fluctuates by as much as 6 to 7 cfs; the flows are reduced to a trickle in the West Bishop ditch system.

“Every time we get a big fluctuation,” Baker said, “we have to reset the schedule. The flows have been consistent for a week now, so we can develop a rotation schedule.”

The bigger picture, how to avoid cfs Russian Roulette on an annual basis, would be to alter the Chandler Decree, something Inyo County and Greg James are looking into. While altering the decree would solve West Bishop problems, those solutions could create bigger problems for LADWP lessees and the Bishop Paiute Tribe, both entities receiving water allocations from Bishop Creek drainage.

We work to provide daily news to all of the Eastern Sierra, in the tradition of Eastern Sierra News Service and the Sierra Wave. We bring you daily happenings, local politics, crime, government dealings and fun stuff. Please contact us.
View all posts by News Staff →
Inyo-Mono election results
Water bills are on their way for Lone Pine and Independence
1 Comment
Newest
Oldest Most Voted
Inline Feedbacks
View all comments

In Hawaii, rain is called Ua (oo-ah) and Ua is a blessing………. For the people of the Inyo, of the Owens Valley, of California ,for all who have had effects in their lives with this drought whether Rancher, Farmer, Native, newly or generational arrived everyone is by now aware of… Read more »