Monday’s Bishop City Council meeting started with Mayor Jim Ellis’ emotional announcement that former City Manager Jim Tatum had passed away over the weekend. He called for a moment of silence, but it will take more than a moment to fully understand that one of the really good guys is gone. 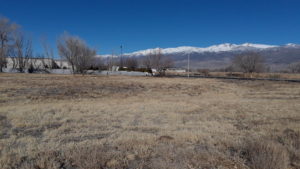 Tatum worked with Larry Emerson, Inyo/Mono Advocates for Community Action’s housing and planning director, on the Silver Peaks, 70-unit affordable housing project at Spruce and MacIver streets. The site purchase agreement from the Los Angeles Deparment of Water and Power was unanimously approved by the Council.

The rest of the news from the meeting came in tidbits with some follow-up.

Councilmember Stephen Muchovej asked for an update on electric vehicle recharging station as an agenda item. Here’s the latest according to Public Works Director Dave Grah. Tesla has tentatively identified a city parking lot on S. Warren Street as their preferred spot. The last time Grah heard, they were working with the LADWP for the necessary power at the site. Vons applied for a building permit to install generic chargers at the Kmart/Vons center. “We’d like to do whatever we can to help the process along,” Grah stated, “and, at some point, may look at developing our own project.”

Muchovej and Councilmember Chris Costello both reported back from the Local Transportation Committee meeting. Caltrans District 9 Public Information Officer Florene Trainor verified the district will conduct a pilot study to test the feasibility of directing truck traffic to the left lane through local communities. The advantage would be a less intimidating pedestrian experience than walkers just feet away from big rigs.

The study would be done in either Independence or Lone Pine. The difficulty for north bound traffic in Bishop is the number of trucks merging to Route 6 at the north end of town. The transition from left to right lanes amidst a tangle of right-turn options would be hair-raising. One aspect of the study, according to Trainor, would be the passenger vehicle comfort level stuck behind a big rig.

Caltrans is working on an Eastern Sierra Corridor Freight Study. Trainor couldn’t verify any info from that study as it is not complete. But, Muchovej indicated an anticipated 40- to 60-percent increase in truck traffic.

According to Caltrans Average Annual Daily Traffic Count, from 1992 to 2015, hauler numbers have held fairly steady, ranging from a low around 6,400 to roughly 6,700 a day measured at Line Street. Another study, done in 2011, shows just over half of those haulers were moving retail goods. A fourth of the trucks traveling the corridor were empty.

Muchovej mentioned the need for additional stop-off facilities for truckers. With the recommended site at 6-acres, he figured with the cost of land to accommodate 110 trucks and the estimated income it would take the City 100 years to break even. So don’t expect a City-owned truck stop any time soon.

Youth ‘epidemic’ use of flavored tobacco products
Patricia A. Broward: 1930-2019