In what could have been the absolute last cannabis discussion at a Bishop City Council meeting Monday, Councilmember Pat Gardner opened the door a crack for further discussion. 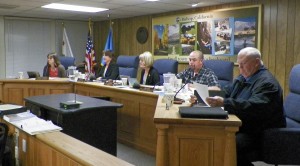 The agenda item was a second reading of the ordinance banning commercial operations within the city limits. Again, the pro-cannabis speakers outweighed the antis by 10-4. Again, the Council opted to go with the ban, this time with a 4-1 vote after Councilmember Jim Ellis went with the majority.

During the Council’s discussion, Gardner said “I can’t vote for (commercial operations) unless Bishop votes okay knowing the state regulations.” She went on to say the Council and community could wait to see what the final regulations are when the commercial aspects of the Adult Use of Marijuana Act actually go into effect January 1, 2018. Then the city could put the issue of dispensaries and taxes on the ballot.

Mayor Joe Pecsi agreed. “It’s going to have to be a ballot measure,” he said. “Nothing being said has changed my mind.”

While Inyo County had three advisory measures on the November 2016 ballot to gauge residents’ tolerance or acceptance of commercial operations within its jurisdiction, the anti-cannabis members of Bishop’s City Council had a different interpretation. All the voting precincts within the city limits approved commercial operations, but Gardner, Councilmember Laura Smith and Pecsi couldn’t assume that acceptance extended to the City of Bishop.

In other action, the City voted to join Inyo County, and four other agencies to date, in a Joint Powers Agreement to develop a Groundwater Sustainability Agency and start to work on a plan to reach sustainability. The irony, according to City Administrator Jim Tatum: “We’ll be judged in 20 years if the plan is successful when we already are (sustainable).”

In a phone interview Tuesday, Inyo’s Water Department Director Bob Harrington agreed with Tatum’s analysis. “This is a large burden put on local entities,” he said. “Grants will be available (to develop the Groundwater Sustainability Plan), but it is an unfunded mandate…. There are a lot of unknowns. It’s going to cost money but we don’t know how much.”

By and large, Harrington said, the Owens River basin is being managed sustainably through the Long Term Water Agreement between the County and the Los Angeles Department of Water and Power.

Harrington told the Council the Owens Valley would be in better shape to get grant funding for the plan development if it were represented by one GSA rather than many. His estimate of that plan ran from 500,000 to a million dollars. The Council voted to sign the JPA.

Other area eligible agencies have until August 1 to sign up. At that point, Harrington said, the water department would develop a budget in consultation with other JPA partners. “We have to work together to reach a consensus,” he said.