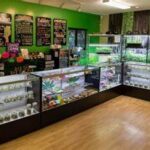 Marijuana Dispensary in Bishop? TBD in the future.

Bishop’s City Council members are standing firm on the marijuana retail operation ban on the record since 2016. Well, at least two of the five are firm, the other three are waffling.

While California approved Prop. 64 in 2016, the Bishop Council kept pot businesses at bay. Councilmember Jim Ellis requested another discussion on marijuana businesses at Monday’s Council meeting. Currently, no pot-related businesses are allowed within the 1.91 square mile city limits, but are in the rest of the County.

The item was discussion only, but the potential of a 3-2 split, if the issue comes back for a vote was clearly in favor of cannabis businesses.

Inyo County went through a series of laborious workshops eventually allowing pot businesses within specific areas and with specific restrictions. So, how did that work out? According to City Administrator Ron Phillips, Inyo’s revenues went from just under $100,000 in fiscal year 2017-18 to $320,000 in 2019-20. Inyo set the tax at five-percent with the option of bumping the tax to 12-percent. The tax rate has stayed at five-percent.

A survey of Mammoth Lakes, Inyo’s Sheriff’s Department and District Attorney Tom Hardy indicated there have been no enforcement costs in Mammoth or Inyo and no cases brought to the DA. The East Side has not been struck with reefer madness.

Mayor Laura Smith was very up front. She will not vote for marijuana businesses within Bishop.

Councilmember Stephen Muchovej cited ballot results in Bishop when four pot measures appeared on the ballot along with Prop. 64. Bishop residents approved all four decisively. The closest Bishop measure, H, recreational marijuana use within the city, had the slimmest winning margin at 57-percent. “I just want to do the will of the people,” Muchovej said.

City Clerk Robin Picken read from a stack of letters related to the agenda item, specifically those indicating the author wanted them read aloud. At the end of the reading, Councilmember Chris Costello questioned those in favor of removing the ban. “I don’t know who those people are,” he said.

Costello asked Ted Stec, Bishop’s police chief, if he had seen any changes in overdoses, driving under the influence or homelessness over the last few years. “Things have changed,” Stec said.

Ellis had toured one of the facilities in Mammoth. “It’s tightly regulated,” he said. “I’d like to look at the whole component.” Councilmember Karen Schwartz also wanted to look at communities with commercial cannabis operations to see how viable they were.

The item was for discussion only, no action was taken, but there’s a good chance the cannabis talks will continue.

Yes, I agree. Bigotry is not an applicable word in this case. However, this is a forum where those of us who disagree can voice our opinions on our leaders. Rather than singling a person or persons out, we can express our dismay at their decisions and as Charles says,… Read more »

Laura “In god we trust” Smith thinks that her personal beliefs and choices (religion, pot, etc) should be forced on others. She was chosen to represent us, not the other way around. We are adults. It’s not like there aren’t 2, easily accessible pot shops in Bishop. It is oppressing… Read more »

We should all research the “meaning of Bigotry,” especially in today’s political and social environment. People come to think or feel about things in a certain way based on their life’s experiences and learning. Some of those people run for public office. We are a “representative democracy,” not a “direct… Read more »

I’m not trying to preach, but I believe everyone that supports legalization of marijuana use, should now be focused on getting the federal government to change its control on THC to the same as alcohol.
I really don’t care what the annual mayor of Bishop thinks!

I believe that the House has a bill before it to move cannabis off the controlled list.

Alcohol ruins more lives than marijuana ever will.

Oops! Did I Say That?

“Mayor Laura Smith was very up front. She will not vote for marijuana businesses within Bishop“ Curious about her stance on the prolific and very illegal, and extremely dangerous meth and heroin going around Bishop and around the Owens Valley in general. And when we’re all going to quit denying… Read more »

“pot” “marijuana”… how about we stop with the colloquialisms and call it cannabis?

Oh Pat. I call usually call it cannabis too, but I think we all know what we’re referring to.( colloquialisms are fun!) This has nothing to do with the subject of this article. Whether it’s marijuana, pot, reefer, ganja, mary jane, chronic, etc, etc… It’s time to set up shop… Read more »

Ian- exactly. How ridiculous to share personal stories instead of examining facts. Very closed minded and not a good example of leadership. Sigh.

From the video segment discussing cannabis dispensaries in Bishop city limits: Councilmember Costello “For the six years I was addicted to pot, it did no good things in my life and set me back quite a bit.” Mayor Smith ” [Talking about cannabis]..It’s an altering substance that, having grown up… Read more »

Absolutely Mark. The fact that this is even an issue is ridiculous. Get out of the last century and start making some revenue.

I remember following that discussion, and to be fair, Jim Ellis was not the deciding vote on that. On first reading he voted to allow for dispensaries and was on the losing end of a 3-2 vote, with Pecsi, Gardner, and Smith voting to ban it outright.

Please folks, let’s get into the 21st century. We are all ( or should be) educated on this now. So, I will ask the question: who thinks alcohol is o.k., but marijuana is “evil”? Obviously, nothing is appropriate in excess, but come on! Let’s get ourselves up to date with… Read more »

I would like to thank ESR for bring this issue to us. Also for the bishop folk in being open-minded, to re look at this issue. Somehow I grew up in the 1970s and never used Marijuana. But I do have a lot of painful lower back issues. I had… Read more »

If you go out to where Rite Aid is you will find 2 carnaubas distributors. I found both stores staff are more than willing to assist you with what products do what. I use 20mg edibles before I go to bed add get a full nights sleep, before I was… Read more »

“Mayor Laura Smith was very up front. She will not vote for marijuana businesses within Bishop.”

I think an important question here is, why? She must have reasons for her her concerns, rather than just “she will not vote for” it.

Perhaps those elected officials believe it’s their job, regardless of the will of the citizenry, to protect us from recreational substances. I anxiously await their proposal to end all alcohol sales in Bishop.

What’s the Mayor going to do when Amazon starts delivering it?

So the people of Bishop voted in favor of cannabis businesses and recreational use in Bishop….and the Mayor said she would not vote in favor of it? Am I reading that right?

The measures presented to the voters were should the county develop regulations for cannabis businesses and whether a tax should be applied to them. State regulations allowed all local governing agencies to create their own regulations in addition to state regs. This was to gauge interest in having another level… Read more »