It was a difficult week and weekend for Bishop Union High School and the girls varsity soccer team, which was supposed to play in the CIF-Central Section Les Schwab Division 5 championship match Saturday but forfeited after an incident involving team members last Tuesday night. 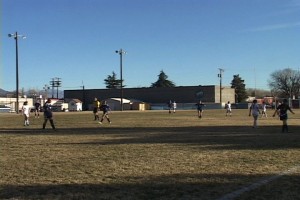 It was determined eight members of the Bishop High girls soccer team were found to have smoked marijuana on a road trip to Orosi last Tuesday, where the Broncos won the semifinal game.

Since it was a night match, school and team officials decided to have the team stay in Orosi Tuesday night for safety concerns so people wouldn’t have to make the long drive back to Bishop at night.

However, school officials later learned that eight members of the team left the hotel that night and engaged in smoking marijuana.

Those team members were not to be allowed to play in Saturday’s title match, but the Broncos, with 16 players on the varsity roster, now did not have enough players to play No.1-seed Fowler in the championship match, and the administration elected to forfeit the title game.

“The administration of BUHS and the Bishop Unified School District were forced to make the decision to forfeit the CIF Soccer Championship game scheduled on Saturday, February 27th. Violations of the athletic code of conduct by multiple members of our girls soccer team occurred. It is with regret that this decision had to be made at the end of what has been a very successful athletic campaign.

“This difficult decision was made to protect the integrity and tradition of Bronco athletics. BUHS will continue to hold student athletes to the highest standards of conduct and sportsmanship in the pursuit of victory with honor.”

Simpson told Sierra Wave Media on Saturday night: “We had a group of kids that made a mistake. I don’t want to go into details about what they did, but a big group of girls made a big mistake following the semifinal win.”

“We had to make a decision … we can’t allow that to happen. I feel for the girls who were not involved, that did the right things.”

Simpson also said, “We’re going to review our policies on how to handle away games, with students staying in hotel rooms. We’re going to tighten up curfews and chaperones … we felt like we had that in place.”

I think it’s great the school did this.

I also think it’s great that Sierra Wave printed the story….BTW this is NEWS @Trouble . =)

Trouble,trouble ,trouble…..Here you go again….That’s what’s wrong with society today,and especially with young people…..no consequences for their actions…what these 8 girls (allegedly ) did was ruin it for the other girls that chose not to indulge in a night that included illegal drug use…and probably involving some bummy guys “partying”… Read more »

P.S., I don’t think the Sierrawave should have printed this article about juveniles.

There were no names printed.

I would bet my next pay check that 80% of their parents and the teachers did almost the exact same thing in high school . To take sports away from kids in the name of setting example for something we all grew up doing and even glorifying in our movies… Read more »

Missing a game is not taking away sports. And of those 80%, the ones who got caught had to face the consequences. It’s called being held accountable for your actions. I commend the school for their willingness to take a stand on this and hold these students accountable.