By News Staff on January 11, 2016 in Government Agencies/Utilities

The 34th annual Bishop Christmas Bird Count was held December 19, 2015, a nearly windless though chilly day, clear in the morning and overcast in the afternoon with temperatures ranging from 11°F to 45°F.

An excellent turnout of 61 birders in 12 teams tallied 101 species with a total of 12,310 individual birds. Overall bird numbers and diversity were average, with many teams reporting fewer birds than in recent years. Most open water was frozen, so waterfowl numbers were slim. No geese were encountered of any species. 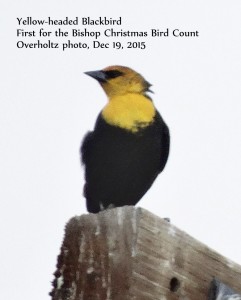 A good selection of rarities were found, notably a male YELLOW-HEADED BLACKBIRD which was new to the Bishop CBC. Yellow-headed Blackbirds typically vacate the Owens Valley for warmer climes in winter and return in late-March and early-April. This bird was photographed at a ranch south of Bishop.

Also rare in December, three male CINNAMON TEAL were observed during count week at Pleasant Valley Reservoir. Cinnamon Teal are typically absent from the Owens Valley mid-winter but return late-January as one of our first ‘spring’ migrants.

A LEAST SANDPIPER was found on count day, also at Pleasant Valley Reservoir. One team was lucky enough to find a BURROWING OWL beside an earthen burrow north of Bishop.

TRENDS – Here’s how 2015 compares with the past thirty-three Bishop CBCs:

Many thanks to all the talented and generous people who contribute to the Bishop CBC!

Many thanks and kudos to all the hearty birders who do this count every year. It is so interesting to hear the comparisons from year to year and the unusual species that show up. Nice to have some “real” world news instead of just the absurdities going on among us… Read more »

Hello, Next year get in touch with Chris Howard ([email protected]) to see if your house is inside the area where we count and I’m sure you could participate. There is also an event coming up in mid February called the Backyard Bird Count specifically for backyard birders! Here’s some info… Read more »