By News Staff on October 9, 2014 in Government Agencies/Utilities 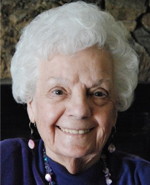 Billie Rose Frost passed away on September 12, 2014 in Hesperia, California. She was born October 1, 1926 in Sallisaw, Oklahoma.  Billie moved to California in 1942 and spent 30 years in Bishop where she raised her family and worked for Contel. Eventually, she became the first female President of the IBEW of Victorville. Later in life she moved to Bakersfield with her spouse to be closer to her son and to support her grandchildren in their activities. She then moved to Hesperia to be closer to her daughter and family.  Her matter-of-factness and honesty will be greatly missed.

Services will be held in Bishop, California on October 11 at Brune Mortuary at 11am. Family and friends will gather at the VFW Hall following the service. In lieu of flowers, a donation may be made to your favorite charity.

We work to provide daily news to all of the Eastern Sierra, in the tradition of Eastern Sierra News Service and the Sierra Wave. We bring you daily happenings, local politics, crime, government dealings and fun stuff. Please contact us.
View all posts by News Staff →
Updated fall colors
Inyo-Mono farmers markets