[UPDATE NOTE FROM LADWP ON POWER OUTAGE: (August 1, 2020) Approximately 100 residential and 4 commercial/business customers were without power due to a traffic accident that occurred overnight.It was restored by 6PM this evening.]

In a report from the Inyo County Sheriff’s Office, around 4:30 this morning, a big rig transporting hay crashed into the Mt Whitney Motel in Lone Pine, CA. The north end of motel was fully engulfed in flames.

Deputy Atkins (Inyo Sheriff) and two brave citizens pulled the driver out of the building that was engulfed in flames; the driver was transported to the hospital for treatment. 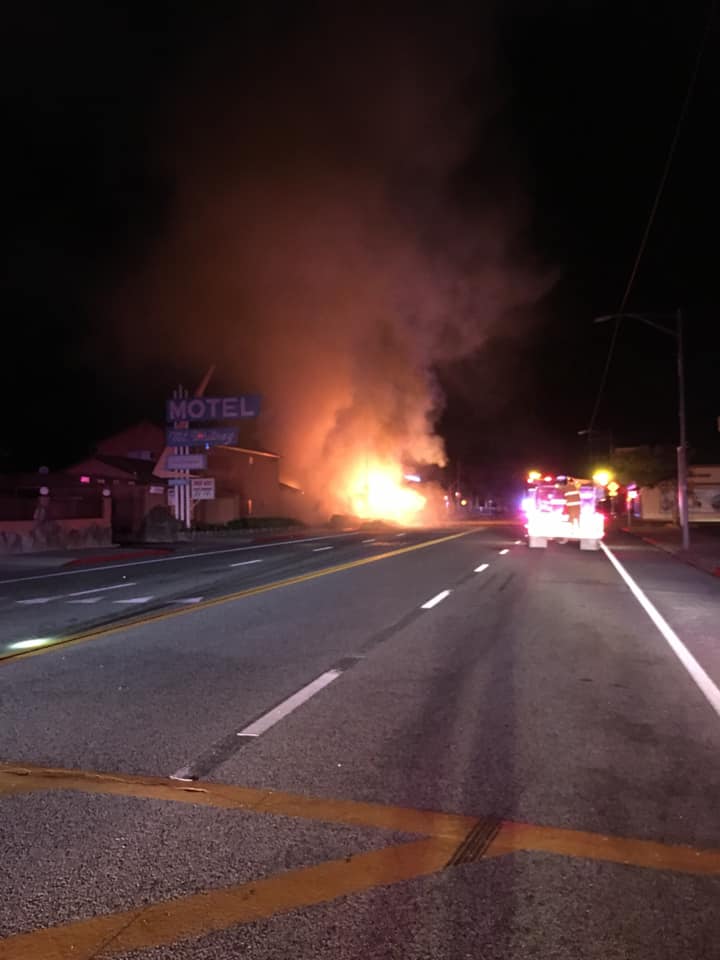 the Mt. Whitney Motel engulfed in flames after big rig crashed into it.

Everyone was evacuated- unknown if there are injuries as of now.

Just to clear up the quick assumptions that were made on the driver. He wasnt under the influence, nor did he fall asleep. He had a heart attack, while driving. He recently passed away after days in the ICU. I know this because he was my aunt’s husband.

Our best wishes to you and all of your family that is suffering from his loss. May he rest in peace, and may his memory be in the hearts and minds forever of those he knew and those that loved him.

That’s terrible. I’m so sorry for your loss

This report says nobody was in the motel at the time of collision, however I was sleeping in room #2 with my friend when the truck crashed directly into our room. Bad policing. We are lucky to be alive and unharmed.

Bad reading comprehension. It says the hotel ROOM was empty.

I was sleeping in room #2 of the motel when the truck hit our room. It was horrifying.

It’s crazy how fast people drive. My brother has a store on Main St in Bishop I heard a CHP yelling around a driver who was clocked at 100mph between Big Pine & Bishop. Crazy !

My husband and I were staying at the motel. Very frightening.

Time for some monster speed bumps.

while I don’t disagree that speeding through town is a problem, don’t you think this accident was likely caused by the driver falling asleep? or possibly impaired driving.

sugarmags Not sure how he lost control,but IMO,he had to have had some kind of control of things after the hit the first telephone pole by the park. His truck and load traveled the sidewalk by Carl’s Jr.,not the street,taking out their sign and then into another telephone pole and… Read more »