This story started with the Big Pine Civic Club, years ago. 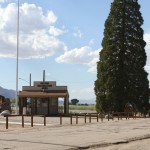 Walt Sharer, Earl Wilson and Bob Steele envisioned a path that led from the north edge of Big Pine, where sidewalks end, on the east side of U.S. Highway 395 to State Route 168, the site of the Roosevelt Pine and the veterans’ memorial display. Pedestrians and cyclists have to brave traffic revving up to highway speeds on a narrow strip of gravel in what District 4 Supervisor Mark Tillemans described as a no-man’s land.

The club teamed up with Big Pine American Legion 457, developed a project description and maps and met with the Los Angeles Department of Water and Power, recalled Sharer. “It was all misplaced and redone,” he said. The concept was expanded to include repaving the worn parking area at the memorial site where the community congregates for national holidays and Christmas tree lightings. 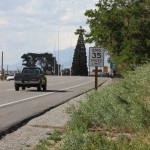 Now, with the help of Great Basin Unified Air Pollution Control District dust mitigation grant funding and Cal Recycle, the project is on its way to actually happening.

There’s still work to do, said Tillemans. Since the original concept, a portion of the highway frontage, a LADWP re-greening project, has been fenced. The eventual path will be built inside the existing fence, so the parties will work with the current lessee. County staff will work out the options and Doug Brown, county campground manager, will provide in-kind services, said Tillemans.

The path and re-paved parking lot may not be done for this Fourth of July, but maybe by Veterans’ Day this fall.

Anything that helps Big Pine improve their quality of life is a huge plus! The new fire station, campground upgrades, and possibly solving the water issues on various properties will help immensely. I felt bad for them during the vandalism of the 1990s, and hope for good times ahead and… Read more »

agree, plus the school district is the best kept facility in town and one of the nicest in the valley!