By News Staff on June 6, 2017 in Entertainment/Local Events/Activities, General Misc. Stories, Public Event
Press release
The American Legion and Auxiliary Post 457 are pleased to announce the selection of the 2017 California Boys and Girls State Delegates from Big Pine High School. 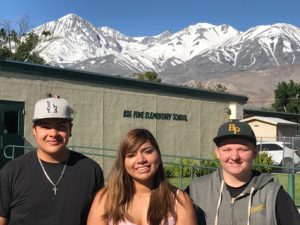 Eric Fairley and Cesar Rico were both selected to represent Big Pine at Boys State and Jamie Robinson will represent Big Pine at Girls State.
The American Legion, which hosts Boys State, and the American Legion Auxiliary, which hosts Girls State, have been sponsoring these valuable programs since the 1930’s.  Boys and girls who have completed their junior year of high school and have demonstrated leadership qualities in their schools and communities are selected to attend this week long program that provides an opportunity for training in civic leadership.
Both Boys and Girls State offer a week-long “simulated government” immersive learning experience of “leadership, patriotism and community.”  A fictional self-governing state is developed, which includes the opportunity for girls and boys to develop political platforms, write bills for debate, run legislative sessions, while immersing themselves in city and county politics.  Participants elect leaders at the city, county and state level, with representatives selected to represent their respective states at Boys and Girls Nation.
Students participating in Boys and Girls State return to their communities, empowered and ready to lead in their own communities.  Past participants include Tom Brokaw, Bill Clinton, Neil Armstrong, former Texas Governor Ann Richards, Jane Pauley and Brigadier Generals for the United States Air Force Sharla “Kris” Cook and Michelle D. Johnson.  Additionally, past participants include leaders in our own communities, who give back to their communities daily.
The American Legion and Auxiliary are proud of these three young students and know they will represent Big Pine with pride!
The American Legion Post 457, the American Legion Auxiliary Post 457  encourage community members who would like additional information about these programs to go to www.legion.org or www.alaforveterans.org.