On Wednesday, April 18, 2018, personnel from Inyo County Sheriff’s Investigations and Inyo County District Attorney’s Office executed a search warrant at a residence on Olivia Lane in Big Pine after receiving information from the Bishop Police Department that 54 year old Loren Krytzer (a convicted Felon) was in possession of firearms. 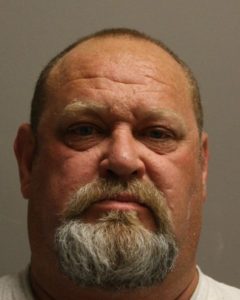 After Investigators conducted follow up, a search warrant was obtained. Investigators recovered a total of nine firearms, high capacity magazines, and several rounds of ammunition.

Krytzer was transported and booked at the Inyo County Jail and held on a $10,000.00; as of the morning of April 19th, Krytzer had posted bail and was released from custody. 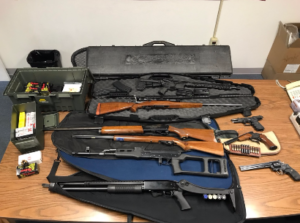 Folks, I am a convicted felon who lost $20,000 , in ’05, worth of firearms on a TRO. The last thing I want to do is go back to prison for firearm possession. I am disarmed and have gotten used to it. I fought the law and the law won.

Low inyo comment is what we have right now for President?????

@BK, Not sure what universe you’re living in? For most Californians there will be no tax cut. while I may be getting a few extra bucks each month now, my tax dude made it very clear that I will more than make up for that in federal taxes due on… Read more »

That’s not true find a new CPA… Also, our family saved $1,200 in healthcare thanks to removing some of the Obamacare regulations. You may have your opinions, but I’m seeing the actual cash…

@MP, My tax man doesn’t write the rules, he just applies them. You may be outside of the majority. Statistics show that 80% of the Californians who deduct their state income taxes and property taxes will exceed the $10,000 limit on deductions imposed by the GOP tax plan. For MANY… Read more »

Mono Person, you saved money on your healthcare plan because that plan is now worth less than it was before. The regulations stipulated that certain minimum standards be met, thus ensuring you wouldn’t be saddled with huge out-of-pocket costs were you to have a health crisis (which basically defeats the… Read more »

T-Bone….I was told by both some trump-worshipers AND heard trump himself on T.V. say in one of his President Obama-bashing rants during his campaign,that Obamacare was going up 900 % in California IN 2017,telling ANOTHER lie,hoping for more California votes back then…..my Obamacare went DOWN $ 3 a month in… Read more »

We are very concerned over reports from 2024 about suspected collusion between Kanye West and the Russians. We will investigate until we get to the bottom of it.

Come on,Buzz…Do you REALLY think the citizens of America would ever be dumb enough to elect some Hollywood reality-show star with a creepy past and a big, stupid mouth that treats women like objects to be President of the U.S.of A. ?

Truth is stranger than fiction

“You really think criminals will obey gun laws?” Criminals do not and will not obey gun laws, they ignore them and sometimes exploit them by victimizing unarmed citizens. It sounds like maybe citizen(s) informed law enforcement that Loren Krytzer, a known felon, was in possession of firearms. If that happens… Read more »

I talked to a lot of locals about this. Overwhelmingly most said they would look the other way and mind their own business

John…..probably some type of intimidation…

I was thinking more along the lines of voters and citizen lacking backbone.

Further gun regulation is a joke if the Feds and State can’t even keep guns out of the hands of felons. The article says he was in possession of a prohibited fire arm. I’m curious which one that was. The shotgun with the folding stock or the AR style at… Read more »

Wait you mean to tell me the gun control laws didn’t stop this? Tell me how this could even have happened gun control crazy’s? Weird the bad guy still got a gun.

Any new gun regulation won’t work until current regulation keeps guns out of the hands of convicted felons.

Bishop Local, the law that says felons cannot own firearms is, technically, a gun control law. And it just stopped this man from owning those guns.

T-Bone….Think Bishop Local’s comment is geared more towards being a trump and NRA-worshiper,like trying to ” take everyone’s guns away “,and maybe like what “Trouble’s ” comment says above,denying this guy his Second Amendment rights….from as long as I can remember in my lifetime,if your a convicted felon,you lose your… Read more »

Good thing we don’t have a Waffle House here. Scary

Sounds to me like he believes in our constitutional rights a little to much.

Yep,Trouble….let’s make it legal for violent felons to be able to purchase and pick-up firearms of their choice… the heck with anytype of background checks….let’s make them able to pick-up and purchase same-day…..including pistols and assault rifles….

Is this the same guy who got a mullion plus for a rare blanket?