By News Staff on May 17, 2018 in General Misc. Stories, Government Agencies/Utilities

The Los Angeles Department of Water and Power took a long look at a feasibility study for the use of recycled Big Pine water on a 160-acre mitigation project east of town in exchange for the department irrigating the Bartell parcel next to the community’s schools. The department didn’t like anything about the proposed project, noting a cost to rate-payers for lost water at Bartell, the ruination of a successful mitigation project and health and safety concerns. 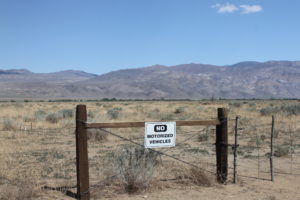 The study was conducted by RO Anderson and funded through a $267,000 grant from the Integrated Regional Water Management Program. Two years ago, LADWP wrote a letter in support of the study.

The Bartell parcel has been the source of contention for years. One side says the parcel was mis-classified when irrigated ag-related parcels were being identified. The error could have occurred since the parcel appears to be within Big Pine’s commercial district. In fact, it was irrigated but the source of water was cut off when Hwy. 395 was widened.

LADWP’s position on the Bartell parcel: it is under no obligation to provide irrigation. That assumption translates to a loss of water for the department rather than the County’s water neutral position. 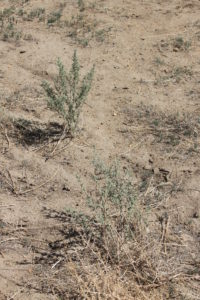 The department’s rejection letter states seven perennial species, adapted to the conditions of the site, are “thriving” since they were seeded two years ago.

Inyo’s Water Department response cites LADWP’s 2016 Valley Report on the E/M project: “LADWP is in the process of developing a drip irrigation system for this site. However, a water source must be determined for the site. Potential water sources are currently being evaluated.” In 2016, native vegetation coverage was estimated at 2-percent; the goal is 8-percent.

In addition, DWP’s 2017 Annual Report identified the 160-acre mitigation project as completed but not meeting goals.

The consultants participated in two community workshops, walking community members through the different requirements and potential uses for the varying degrees of waste water treatment. Because of the cost factor of tunneling under channels and Hwy. 395 and pumping waste water uphill from the Big Pine Community Service District’s treatment facility, the 160-acre mitigation project seemed to be ideal especially in light of LADWP’s 2016 report. 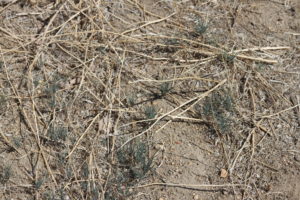 Little baby Russian thistle, aka tumbleweed, make up a large part of the acreage’s vegetation.

The only real value to the community, however, was dust control and a piece of Big Pine’s east side greened up. Dealing with the Bartell parcel seemed like a likely trade-off for providing irrigation for one of DWP’s mitigation responsibilities.

The County’s letter was accompanied by one from RO Anderson taking issue with the department’s assertions. The consultant noted that underground drip irrigation, as proposed in the study, had been successfully used in other Valley locations.

The consultants also corrected LADWP’s assertion that the proposed use was not allowed under Title 22. It is allowed on non-edible crops with subsurface irrigation. The letter to goes on to state existing vegetation did not have to be destroyed during installation of the irrigation system. And, since the parcel had been fenced since 1998, the use of subsurface recycled water posed little if any danger to the public.