By News Staff on February 1, 2013 in Government Agencies/Utilities 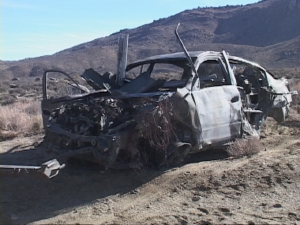 Thursday around 9pm, a 22-year-old Big Pine man sped away from a CHP officer, veered up Bir Road off South Barlow Lane, and at 80 mils per hour could not make a right hand curve. He flew off the road, struck numerous boulders, was ejected from his car which burst into flames. John L. Ericson, Jr. of Big Pine died at the scene. 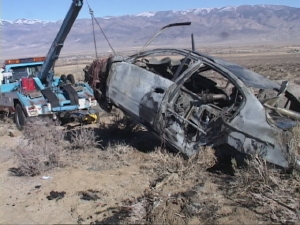 According to the CHP, an officer saw Ericson driving on Brockman Lane, south of Highway 395 at a high rate of speed. The officer tried to stop Ericson who then accelerated and began to flee, according to the CHP.

Officers said Ericson kept going on Line Street and then southbound on Barlow Lane, traveling at around 100 miles per hour. He made a right turn on Bir Road at about 80 miles per hour.

Officers said the driver could not negotiate a curve to the right and flew off the south roadway edge into the desert. The car struck several large boulders and Ericson was ejected and died from his injuries.

Rest in peace john and my condolences to his family and friends. I played football with john in highschool and had a couple classes with him he could make anyone laugh. He was a good young man and may he an his family find peace where ever they may be… Read more »

I watched John when he was about 10 years old. He loved basketball, and during the half time of local Big Pine games he and the other kids would get on the floor and shoot shots from all over. John was better than most at the early age of 10.… Read more »

It’s pure and simple. Disrespect for laws today. I wonder if anyone has asked, “Why was he speeding?” Maybe y’all should wait for the FACTS before your goofy speculation.

Well you know what Stephen, People might respect the laws more if the officers held themselves to the laws they hold everybody else to!!

what I do not understand is why the CHP just did not back off and catch up with the driver after he cooled off, seems to me they just made a bad situation worse, and now there is a grieving family.

Law enforcement cant just back off and hope for the best, that’s ridiculous.

Judging by the speeds and the distances traveled, they might not have even had a chance to think about backing off before the accident happened or even be that close to him for that matter. I remember a “chase” I was riding along on where we attempted to catch up… Read more »

sorry Andrew, but I don’t agree. While its sad this happened, one cannot blame the CHP for it. What if they had ‘let him go’ and then while driving home he caused a head-on collision, killing others? There’s no easy answer here, but I do believe consistency is key. If… Read more »

Andrew- I agree with you totally and many police departments in California have adopted policies not to chase people without a good reason. I think we should look at our local policies at the very least. My condolences and prays go out to John’s family and friends.

You should check the facts. The newspaper and this newscast did not have the facts before they released it. It hard to speed when you are following someone and stopping at stop signs. I want to know why the CHP chased him to a one way canyon when they knew… Read more »

Mam, I am so very sorry for your loss. The media quoted the CHP. That’s the only story we had. Would happily appreciate more facts, if
and when they are available.
Sincerely,
Benett Kessler

andrew…..It seems up here in the Owens Valley, the last thing Law Enforcement would want is a high-speed chase on HWY 395….If they try to stop someone on a back road, and if they attempt to flee at high speed,they SHOULD try to stop the chase before it involves HWY… Read more »

The death of a young person is sad regardless of circumstances, as is true of the death of almost anyone of any age. The problem with “pithy” comments is that often come across a crass and unnecessary, even if the comment is true and the one making the comment was… Read more »

Thank you, Charles. Your point is very well made. There is no need for judgment now but caring for those so badly hurt.
Benett Kessler

Condolences to the family and friends and those effected by this tragedy. (Not the time for some heartless quote dean! !)
On another note I am done reaching out to this audience. .
(Quote me on it).
Peace Y’all.

uhohhh you cashin in the chips Jerry? You don’t have too, do you?

I don’t think you would be so frank if it was your relative.

That’s the problem with today’s society.. People have stopped being frank. Well said dean… There are many in the community who will fault the CHP, but in reality the CHP was doing what they were trained to do and this young man made a choice that caused him his life.… Read more »

I disagree NRA, That is not the problem in today’s society, But that coming from you doesn’t surprise me.
Nobody has faulted the CHP.

A terrible waste of a young life, for the choice not to stop. My heart goes out to his family, this is never easy. He never thought his actions would cost him his life. And yeah … the officer had to watch this happen, that is a messed up thing… Read more »

JAE, more thumbs down for you…again.