The American Legion and Auxiliary Post 457 and the Big Pine Civic Club hosted a celebration of their 2015 Boys and Girls State Representatives on Monday, October 12, 2015.   Ben Truelsen and Kaylee Simpson, the 2015 Boys and Girls State representatives from Big Pine High School shared with community members what the experience meant to them, as well as what they learned at the program. 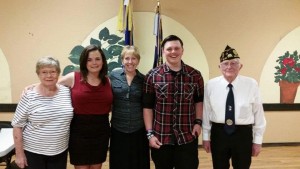 The American Legion, which hosts Boys State, and the American Legion Auxiliary, which hosts Girls State, have been sponsoring these valuable programs since the 1930’s.  Boys and girls who have completed their junior year of high school and have demonstrated leadership qualities in their schools and communities are selected to attend this week long program that provides an opportunity for training in civic leadership.

Both Boys and Girls State offer a week-long “simulated government” immersive learning experience of “leadership, patriotism and community.”  A fictional self-governing state is developed, which includes the opportunity for girls and boys to develop political platforms, write bills for debate, run legislative sessions, while immersing themselves in city and county politics.  Participants elect leaders at the city, county and state level, with representatives selected to represent their respective states at Boys and Girls Nation.