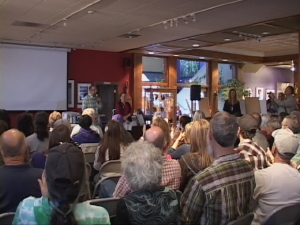 A group that started with a handful of people when the Water Agreement with DWP came up in the early 80s, attracted more than 150 to the Mountain Light Gallery on Saturday. The Owens Valley Committee stands as one of the only citizens’ groups in Inyo County that has fought, sometimes in court, to protect Owens Valley environment.

Long-time members and supporters were there along with some officials, although no County Supervisors were spotted. The event was the Committee’s major fundraiser for the year. A silent auction took place and Metabolic Studio had agreed to match funds raised – hopeful news for a group that functions solely on donations.

Past President of OVC, Alan Bacoch, spoke briefly and handed the microphone to new President Mary Roper, Inyo’s former County Clerk and long a fighter for the environment and ethical government. The crowd took a seat to watch a short film on the Owens Valley Committee, featuring some of its members and their feelings about the importance to fight for what we have in the 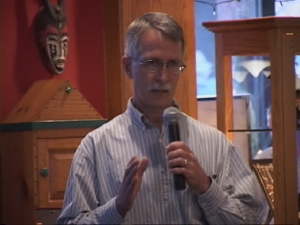 The featured speaker was Bill Powers, a San Diego engineer and team member of Solar Done Right, which is described as a “coalition of public land activists, solar power and electrical engineering experts, biologists and others who view with concern the rush to develop our few remaining wildlands for industrial solar energy.” This same issue has recently concerned the Owens Valley Committee and many others who now witness Inyo County’s attempt to put in writing 14 planned areas for industrial solar.

Mr. Powers’ mantra includes conservation of energy, generation of renewable energy at or near the point of use, and generation of renewable energy on a larger scale within the already built-up environment. The How to Do Solar Right website says, “We contend that a mixture of these techniques can meet our electrical energy needs without the need for large remote concentrating solar projects.” In his talk at Saturday’s event, Powers pointed out that California has set renewable energy goals for utilities and others. He also pointed to the fact that government subsidies have encouraged large-scale solar.

Powers and his organization strongly encourage rooftop development on warehouses, parking lots and other available and developed city areas. He said this method is actually more cost effective. Powers said Inyo County could look at a rooftop development and generate enough power for its own uses.

As for fighting plans by the Los Angeles Department of Water and Power, Mr. Powers said the story has to be pitched in LA. He said Mayor Garcetti campaigned on expanding LA’s rooftop solar development which could take the place of industrial solar in the Owens Valley.

The OVC fundraiser demonstrated the immense passion and power that can be generated when we pull together giving us all hope for the future of the Valley. Bill Powers made the case for distributive renewable energy with Germany as an example of what can be accomplished. Now, we need to… Read more »

The Chair of the chairs brought the truck , We moved 140 chairs to the Gallery, every one was filled and many more people were standing . The music played, gifted minstrels, Food on the table, never enough when it’s so good , the Gallery and the Art in the… Read more »