By News Staff on April 10, 2014 in Government Agencies/Utilities

Two weeks ago, a woman from out of the area brought her dog to Mammoth Lakes, left it with a dog walker and Bentley the dog got away. He was sighted in several locations from Antelope Valley Road to the geothermal plant. Thursday, he was found by Mammoth Wildlife Specialist Steve Searles and patiently captured by Mammoth Police Officers. 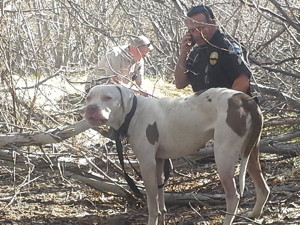 Bentley with Detective Doug Hornbeck (in back) and Sergeant Marc Moscowitz with phone as they rescue the lost dog. (Photo courtesy of Steve Searles) 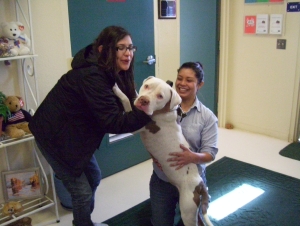 It was a heart-breaking tale of a reported service dog lost. Many locals in and around Mammoth Lakes tried to find Bentley. Searles said he received two or three calls per day about sightings of the dog and people who wanted to help. Bentley’s owners had camped out and tried all kinds of methods to lure their dog home.

Wednesday, workers at the geothermal plant saw Bentley.  Searchers concentrated their efforts there.  Lynn Dunlap said one of her customers called her to say Bentley was seen drinking out of the duck ponds at Snowcreek Golf Course. Dunlap said she called Steve Searles. He responded and saw the dog dragging his leash. Searles had seen photos of the dog and knew it was Bentley. Said Searles, “I took off after him.”  He pursued the dog through thickets and called Mammoth Police to help.  Detective Doug Hornbeck and Sergeant Marc Moscowitz responded.

Bentley’s leash got snagged on a bush. Hornbeck and Moscowitz threw dog cookies at Bentley, who was barking and growling. Then, Searles said, Moscowitz called the owner, Stephanie Diaz, on the phone. The Sergeant held the speaker phone toward the dog. She called to him and talked to him. The dog cued in on the phone and Moscowitz drew closer and closer. He patiently worked toward Bentley, finally feeding him cookies and then petting him.

The strategy worked. They grabbed the leash and led Bentley to the patrol car. He jumped in, and they closed the door. A painful saga came to an end. The officers drove Bentley to the Whitmore Animal Shelter for safekeeping until his people could come up and finally take him home.

Good job sugarmagnolia! I can only imagine how frantic the pet parents of that German shepherd must have been to find their lost doggie in Death Valley. I hope you made some new friends too.

I’ve been out of town for 4 days so this is news to me…how fantastic! See I’ve told people that there are still respectable Law Enforcement Officers out there. Mammoth PD (and Steve Searles) rock! Side note, I found a lost German shepherd on a remote desert road on the… Read more »

Wonderful story with a great ending! The MLPD keeps milk bones stocked in their kitchen cupboard just for these types of “calls”…heh! 😉 Way to go guys. The owners should buy you a new box of milk bones…ha!

Great story in a week with little good news. Way to go Steve, Doug and Marc! Thanks for following this, Benett, and printing the happy tail.

It’s really special to have a lead story that makes you feel good. Good work for everybody involved. And congrats to Bentley for toughing it out.

I can’t wait to finally meet the elusive Bentley! It’s been a crazy two weeks of looking everywhere, only to see signs of where he’d just been. Thank you, everyone who helped with getting him back home!

Wow! What a great ending to this incident! I was so worried about the fact he was dragging a leash. Happy days ahead now! Thank you to all involved.

Very good news!! Good to see so many people out looking for him.

I’d be barking and growling too.
Wait a minute, the dog recognized his owners voice over the phone?
Could this be a new training method for fearful dogs? Bust out a cell phone.

Before I found “Knucklebrain” wandering the mean steets of Lancaster I would leave my female husky Karly with her “mom”, my fiancee, for business travel. When we’de speak on the phone she would have me call Karly’s name. Karly would hear my voice and lick her cell phone! Same thing… Read more »

So happy this ended so well. We live in a great town where people come together and help.

He was dragging a LEASH behind him out in the wild, wicked world for two weeks ? He’s one helluva’ survivor to dodge all the predators that must have been after him. Love a good ending…

Thank God and Steve Searles and MLPD and all my friends who focused on finding this guy. There is NOTHING better than a happy ending. Wishing you and your family a loving, happy rest of your life together, sweet dog.

I’m picturing in my mind Mr. Searles running through the underbrush chasing Bentley while trying to call MLPD on a cell phone. And poor Bentley dragging his leash. Isn’t it fortunate that the one time the leash hangs up and stops him is the time his rescuers were coming to… Read more »