By News Staff on February 3, 2015 in General Misc. Stories, Obituaries

Today, February 3rd, is Benett Kessler’s birthday. She would have turned 66 years old. 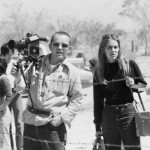 I had the privilege of working for Benett for a time, beginning in 2004 when Sierra Wave was known as K-DAY. She was extremely generous with her knowledge and encouraged me to report on any topic I chose, which is not always the case in a hectic newsroom setting. We remained friends and engaged in an active email and phone exchange over the years.

If you spent any time at all around Benett, it became immediately clear that she was a force of nature. Fierce of spirit and intellect, she was never one to suffer fools. But Benett was also affectionate, quick to laugh and engage in deep merriment. That’s one thing I’ll always miss, now that she’s gone—hearing Benett’s robust laugh, accompanied by the flash of those eyes that didn’t miss much of anything in the world around her.

Benett was one of the last of the old-school American journalists, unafraid to take on the fat cats, shills and bureaucrats, tenaciously asking the uncomfortable questions, while others in the trade are more content, it would seem, to regurgitate sanctioned press release pabulum in order to maintain the status quo. Benett instinctively understood that the official story is never the full story and doggedly worked to dig deeper to reveal the full truth of whatever story she covered. She was also a champion for the voiceless, holding the concerns of common people and the Eastern Sierra environment as her top priorities.

When I told a man from Big Pine about Benett’s death, he grew noticeably paler and asked, “Who’s going to take on the politicians, now?” A Bishop woman, whose mornings always began with Kessler’s news reports, told me, “Benett was very important to me. She was fearless.”

Benett possessed a hungry, curious mind, read widely among the world’s great texts and was a student of history. She embraced the philosophical stance of Colonial American patriots, and was particularly fond of the popular 1770’s motto, “Don’t Tread on Me,” emblazoned on many flags of the day. She did indeed hold dear the notion of individual freedom, but also championed personal responsibility within the civic sphere. It is no wonder, then, that she chose a career in journalism.

For a generation, Benett brought the news of the day—good, bad or controversial—to the people, regardless of opposition or even downright enmity. In a word, Benett embodied integrity. We are all the richer for her grit and hard work, and therefore that much diminished by her too-soon passing.

We can only hope that somebody soon will step in to continue the vital work of challenging the official story while looking out for the interests of the people of the Eastern Sierra.

However you wish to do so, whether by raising a glass of your favorite beverage, lighting a candle or simply sending a thought or prayer into the Great Mystery, I hope you will on this day commemorate the birth—and life—of a remarkable human being, the late, great Benett Kessler.

Bennett was truly a trail-blazer in her field, un-afraid to step on powerful toes if it was warranted. She told it how it was and was surprisingly respectful of all of our individual opinions, even if they weren’t exactly spot-on or politically correct. A couple of times, my (over the… Read more »

I learned a lot from Bennett, even though we disagreed on some topics she always seemed to respect everyone’s opinion, even if she didn’t agree with them. She wasn’t afraid to tell somebody they were nuts, in a politically correct way, or maybe that was just me. She seemed to… Read more »

Wonderful tribute. I couldn’t agree with you more. Benett had a true heart and loved to stick up for what was right. More people should be like her, I miss her dearly and it is a loss we will all feel from now on! She left a footprint on the… Read more »

Thank you Andrea for your lovely heartfelt tribute to such an excellent human being. Like you I miss Bennett terribly. I was back east with my father who is fighting pancreatic cancer when Bennett passed and I wept when I heard. What a loss. I was a young woman when… Read more »