By News Staff on October 4, 2013 in Government Agencies/Utilities 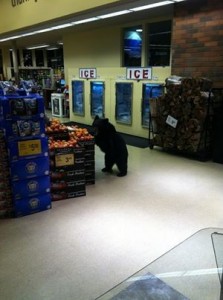 Photo of bear in Vons went viral on Facebook.

A small black bear recently went on a late night shopping trip for apples at the Mammoth Lakes Vons. While the photos of the bear inspecting the fresh fruit are entertaining, they also serve as a reminder that we are in the busiest season of the year for bear activity.  They are preparing for winter and gorging on food.  Bears that spend most of the summer in the back country have come to town to feed.

This young bear, which has little fear of humans, has become accustomed to relying on people for food.  He now knows how to get into Vons when the store is open and he’s previously entered homes to feast on pie.  He is likely to return to Vons and if he isn’t properly conditioned to not rely on cars, houses, ice chests, and now supermarkets for food, he will become a problem bear and his future will be bleak.

The public is encouraged to take precautions to secure their trash in locking cans and dumpsters, don’t leave food in vehicles or in the open, lock your vehicle doors, and if you encounter a bear that’s misbehavin’, call Wildlife Specialist Steve Searles at (760) 937-BEAR, or the Mammoth Lakes Police Department.

This is also a busy season for other wildlife.  The deer population has begun its migration to lower elevations and there are many deer in Town.  Please slow down and keep your eyes open for deer on or near the roadway.

As Vons employees stocked shelves in the wee hours of this morning, a nearly two-year old bear, familiar to Wildlife Officer Steve Searles walked through the electronic doors to Vons and helped himself to some apples.

One of the Vons workers, Margie Castaneda, shot a photo, which is posted on our website. She posted the cute image of the young bear on Facebook and it went viral. Steve Searles said the bear image went all over the world. He said it is one of the cubs that survived after its mother was killed in a traffic accident last year. Searles said the bear grew up with another mother bear. He called it a very tame animal.

This season, the bear walked into homes where the doors were open and took a loaf of bread and some fruit. Mammoth Police, Searles and Fish and Wildlife had a meeting and talked about possibly having to destroy the little bear if he persisted in his home invasions.

Searles said the bear quit entering homes and spent the last two months in the Lakes Basin. He only just returned to town a week ago. Vons employees peacefully coaxed the bear outside this morning after his 1am entrance into the grocery store.

Steve Searles said all bears will go into hibernation in about 30 days, and he hopes the town’s people will pull together to help this bear survive. If residents keep their house doors and car doors locked, that will help. Searles is working on modifying the bear’s behavior with his usual methods. He points out that he has been able to change the ways of a number of problem bears.

So, help the little guy by making it hard for him to get in where he doesn’t belong.

Hogan spells it out for Town Council
Letter to the editor: Of frogs and fish
37 Comments
Newest
Oldest Most Voted
Inline Feedbacks
View all comments

Did he show is Vons club card?

I would bet his preferred apples are Honeycrisp!!

>Mammoth Police, Searles and Fish and Wildlife had a meeting and talked about possibly having to destroy the little bear if he persisted in his home invasions.< People come to Mammoth to see nature, to be in nature, to see a bear in the mountains would be a highlight for… Read more »

“Bears that spend most of the summer in the back country have come to town to feed.” Dumb statement — why would they go into the back country, when they have thier set dumpster route(s), including McDonalds etc(?). They are all living right here in town all year round.

Actually, they hibernate from the end of October until Spring.
BK

And the bears do spend time up in the Lakes Basin stealing strings of fish and grazing camp sites. A bear was killed up there a couple of years ago by somebody with one of those “itchy trigger fingers”.

It is clear now that some amongst us would prefer to shoot all bears.
Preferably using their AK-47s.

Faceful of pepper spray or ass full of rock salt might stop him from breaking into houses, stealing apples and getting shot for real.

One note – it’s tough to be there when the bear crimes occur. Sometimes it’s possible and Steve Searles uses non-lethal means
to teach the bears their lesson.
BK

Our bears are so smart that when he noticed that all he has to do is walk in front of the door and “Presto!” the door automatically opens for them …and oh, what wonderful smells are in there! Maybe Searles can camp out by the door for a while and… Read more »

Sheesh, the police station is across the street. Can’t you make a call, then get your photos. Steve’s the only one that knows how to yell in town?
Mammoth is schizophrenic.

When did Vons start selling leaves?

Leaves are with the salad Suzie Q, they also carry some in the spices section.

I think we have all seen the Smokey the Bear forest fire image floating around the web, “Only you can prevent forest fires… No really, I’ve been furloughed.”

Well now we know how Smokey is keeping fed while not receiving his Gov paycheck.

Wayne – Chill. This bear is just doing bear things. Hardly a “problem bear” you seem paranoid about. Our neighbors the bears are smarter and much more responsive than you might think. Everyone gets along fine here. No problem. Perhaps you are upset that the bear is a freeloading liberal… Read more »

Wayne may be concerned about the fact that Fish and Wildlife met with Mammoth Police and talked about killing the bear. The Police Chief’s press release is a sobering reminder that we all need to be aware of the bears and other wildlife and do things to help them live.… Read more »

the answer to everything
Reply to  Benett Kessler

Boys and their guns.
Tsk Tsk.

I’m very hopeful that the bear cleans up his act and it doesn’t come down to a death sentence… but IF it does, the DFW had better do their own dirty work this time and not pawn off the job to Mammoth PD, like they did a few years back… Read more »

Hardly a “problem bear”?…Seen going into houses…..walking into a market stealing apples….and like Benett said,F &W along with Mammoth Police talking killing the bear if the behavior keeps up….sounds like a problem to me…..especially for the bear….Is it common practice for your bears in Mammoth to break into houses,and go… Read more »

Wayne must not live in Mammoth. Here we live with and get along fine with our furry neighbors. We know what attracts them this time of year and take the proper steps to not tempt them. This is clearly an isolated incident. Please note: There has never been a mauling… Read more »

Chill…..Don’t live in Mammoth,but do know of incidents that didn’t end too well for the bear up there….or,for that fact,anywhere else once it gets around people,and grocery stores too much….Few years ago,had to put a bear down up at Whitney Portals when a bear got around the campgrounds and acted… Read more »

California Black Bear Public Safety Incidents CDFW has recorded 12 “bear attacks” since 1980. In some cases, the details of these attacks were not completely known. According to the CDFW’s statewide public safety guidelines, a wild animal attack is defined as “physical contact, injury or death.” Each attack is summarized… Read more »

No maulings in California?

How about Allena Hansen in the southern Sierra Nevada?

It was the EXTREMELY mild winter that saved those bears. Unless the Fish & Game (as they were called back then) had a crystal ball that could predict the weather, they had nothing to do with the survival of those bear cubs, NADA !

Also, we’re talking one bear cub. Don’t know about the other one.
BK

They get their nurishment BEFORE winter arrives not during the winter unless they indeed needed their mother to live. You are all worried about how much DFG spends on stops and citations and you whine when they save money by not sending the cubs to a rescue center and let… Read more »

If the 2 cubs whose mother was killed by a car last year are indeed still alive, I think that there are a lot of people on this site that need to call DFW and apologize to the biologist and other personel that you badmouthed and called incompetent for not… Read more »

I wonder why it took so long for our PHD bears to figure out that we have closed off the dumpsters thus removing their food source and that the grocery store has a better selection of fresh food like tasty apples. All kidding aside all Vons needs to do is… Read more »

Vons is experienced in lockouts.

Mammoth PD has an all points bulletin out for a shop-lifter on the loose.

Actually I think Steve is doing a good job of education the bears and of course, probably more importantly, the people!

I like this bear. I think he should run for city council.

Did he use Vons CUB?

Wow, Steve is doing a great job teaching these bears!

Teach him to be a union contract negotiator and Vons will run him out of town for good.