For the many Mammoth residents concerned about bears and wildlife management, confirmation and comforting statements were issued from Community Relations Manager Stuart Brown Wednesday.

Brown's press release states that "in response to the immediate need to address an increased number of bear incidents in the Town's urban limits, Steve Searles was rehired by the MLPD as the Town's Wildlife Management Specialist and will work in that position while the newly formed subcommit 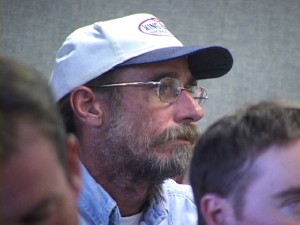 The press statement points to the August 28th Town Council meeting and the substantial public testimony on bear management issues. Most of those who testified from among the standing-room only crowd spoke in favor of local, friendly management of the bears and in favor of Steve Searles particularly.

The statement goes on to say that Searles will now immediately implement his "Special Bear Response Program with the anticipated emphasis on public education, enforcement and wildlife interaction," according to Police Chief Randy Schienle, who earlier had said he didn't need Searles to handle bear matters.

Searles is quoted as saying that he wants to use all available resources in the community to educate the public and visitors on being bear aware.

If you need Searles assistance on bear problems, call either Mono County Sheriff's Dispatch at 932-7549, extension 0. Or call Steve at 937-BEAR.

We work to provide daily news to all of the Eastern Sierra, in the tradition of Eastern Sierra News Service and the Sierra Wave. We bring you daily happenings, local politics, crime, government dealings and fun stuff. Please contact us.
View all posts by News Staff →
Second Trial For Former Police Officer
Bureaucrat Beat: 9-11 Analysis, Quiet Time, and Paris Hilton Housing Crisis