By News Staff on June 26, 2012 in Government Agencies/Utilities 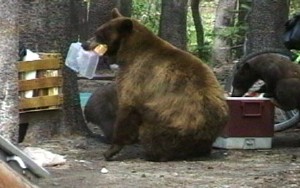 Chief Watson said he has tried to get Searles legally authorized to use his hazing, flash-bang and rubber bullet weapons involved in bear management.  The Forest Service has declined.  Officials point to a federal firearms ordinance.  Forest attorneys say unless someone is a peace officer, no lethal or non-lethal weapons are allowed on forest land. The Chief explained that the prohibition on the use of firearms or non-lethal weapons applies to developed properties in the forest – 150 yards from them.  He said that would cover streets, cabins, parking lots, or anywhere that people would be.  There is no prohibition farther away from developed locations.

Forest Service land entails most of the area where bears roam around Mammoth.  Right now, police officers have to use the non-lethal weapons.  Chief Watson said his officers work in a reactive mode to problem bears.  Searles, he said, is the one with the ability to spend two or three hours tracking, watching and disciplining problem bears.

The next thing the Chief will try to do is go for federal legislation and an exemption for Searles’ work.

Right now, the bears are very active in and around Mammoth Lakes.  When we spoke to the  Chief he had just gone out with Searles to deal with a young bear that has been stealing fish from tourists.  The bear, said the Chief, needed discipline and got hazed.

With the pressures now on the Mammoth Lakes Police Department with a huge overtime cut and the loss of a position, there won’t be much time for bear management.

chief Watson just deputize Searles as the bear cop. then he can work the lakes .

Keep up the great work that you do, it’s very much appreciated!

I would like some hard evidence please, where any mauling has taken place in California by bears.
These are not dangerous grizzly or Kodiac bears, but innocuous black or brown bears who harm no one.

We don’t own the Bears.

The real truth… “As I said before. If Steve needs the proper training and certificated or other academy training then he just needs to get over it and do it. It is insane to keep rehashing the same thing over and over again. Searles could have secured the proper credentials… Read more »

Jake, how ironic that Searles trained our cops on all these devices over a deacde ago. He does not need to memorize the vehicle and penal codes and he will not be making felony arrests. He has more experience with deploying these devices and using the weapons on bears than… Read more »

Well said Reality!! Steve shouldn’t need to go through the full process that the PD does. Gun handling, Bear handling, non lethal, etc. along with his knowledge are what’s needed.

Dude I think we know that! Duh… Steve still needs to do the training…. end of story!

With Forest Service wanting to exercise their control over the Mammoth Lakes bear specialist, the Town should just defer every bear call to the USFS. They have all of these Law Enforcement people out doing public safety work, they sure as the devil could be doing something worthwhile. Bear calls… Read more »

When it comes to Bears people are the problem. Which means the problem will never go away.

Here we go again! I as a supporter of Searles and his work as astonished but not really surprised about the fire arms issue. We heard about it when Chief Schinlie was in office and now with Watson. As I said before. If Steve needs the proper training and certificated… Read more »

Steve would have a tough time at over 50 years old going through a six month police academy with a bunch of 20 something kids. The possibility of serious injury would be very high as well as a disability injury. There would be little chance he could complete the academy.… Read more »

fed up
Reply to  True Blue

Well so are we to make rules specific to individuals. The more years pass by the older Steve gets. The community has been dealing with this same issue for too long. Steve get the training or hand off the job to someone who can do it without excuses.

Benett Kessler
Reply to  fed up

Fed Up, Our news agency has reported on Steve for many years. He is the only one who has successfully handled the bear issue in Mammoth Lakes. It’s not so simple as you would like to assume. Before Steve, Fish and Game simply shot bears they didn’t know how to… Read more »

An air-powered paintball gun loaded with pepper-spray ammo is NOT classified as a firearm and would certainly get the bears attention. Also, I’m sure that somewhere out there, is some kind of electrical device (taser-like) developed for animals. The forest service can only ban the DISCHARGE of a firearm in… Read more »

Good idea Big Rick, but we already tried that approach and it failed. In September 2010 I sent correspondence to the Forest Supervisor advising him that air-powered launchers and TASERs do not meet the legal definition a firearm. The response I got back cited 36 CFR Section 261.10 which prohibits… Read more »

Chief Watson did anyone make the argument that a stick or a pocket knife can cause bodily injury? Would they be willing to outlaw those items also? Sometimes I wonder why the people in the Forest Service are so thick between the ears.

Great idea Big Rick. The problem is that the Forest Service views any air gun, including paint ball guns, as firearms. They make the rules so the bear program will not succeed.

So I guess a slingshot, a pocket knife, or even a rock would be illegal too. Unbelievable.

Jon Kazmierski and the US Forest Service would rather shoot bears than allow Searles to do his job in the Lakes Basin. The Forest Service LEO refuses to respond to bear calls, so they set up the situation for bears to be shot. The fact remains that Searles worked the… Read more »

I want to thank MLPD and Steve Searles for their good work. Earlier this spring we had an aggressive bear that just wouldn’t stop trying to smash into the house, despite pot pounding and yelling. Finally, not wanting the bear to break into the house with my infant children, or… Read more »

The bears are also active up in Lone Pine Campground…went on a fishing trip overnight there about 3 weeks ago and was awakened at 1:30 AM by a bear and cub in my campsite attempting to get into the bear-proof storage box. After watching for a couple minutes,a loud shout… Read more »

What about hunters, target shooters, etc on forest service land? Sounds like a weak excuse!

“….no lethal or non-lethal firearms are allowed on forest lands”. Hmmm. People are allowed to carry firearms on public lands. People hunt birds, deer, bear, hogs, antelope, sheep and bobcat on forest lands all over CA. Bear season opens 9/15 this year. If they want a few bears removed from… Read more »

I’d like to provide clarification to the article. It is my understanding that it is unlawful under Federal firearms regulations to discharge a firearm or use any weapon likely to cause great bodily injury within 150 yards of any developed part of the forest except by a peace officer. This… Read more »