By News Staff on January 13, 2016 in Government Agencies/Utilities

Bishop’s City Council delivered one surprise out of three potentially explosive topics Monday night. The two non-surprises: Interim Chief Ted Stec was appointed permanent chief of the Bishop Police Department and the Council accepted the Revised Initial Negative Declaration on the proposed 15-home Kingston subdivision. The surprise: the members pulled away from a medical marijuana grow ordinance and opted to let the State determine policy. 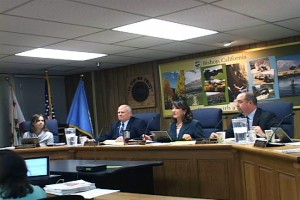 After flying the chief’s position, the City narrowed the candidates down to five. Both City Administrator Jim Tatum and City Mayor Laura Smith described the line-up of potential chiefs as outstanding candidates. Stec won out.

Following the traditional menu of reports, the Council dove into the public hearing on the Mitigated Negative Declaration on the Kingston Subdivision, starting with background information from Planning’s Gary Schley and the revised environmental document consultant Bill Taylor.

The purpose of Taylor’s additional study was to determine if the development merited a full Environmental Impact Review, according to City Counsel Ryan Jones. Taylor reviewed the additional impacts reflected in his study and explained the mitigation measures accepted by developer Bob Kingston.

Kingston opened the public hearing. “The city needs housing,” he said. “I am not selling lots; I plan on building green, low-impact homes as quickly as possible.” The possibility of an owner-build project had raised concern among neighbors of the development. Kingston added that he would be building single-story homes along Bishop Creek as a show of respect to residents on Rome Street.

Terrance Tye and Stan Wooden both pointed out discrepancies in zoning laws, the most recent of which, passed by the City Council in 2011 according to Tye, identifies the site, currently occupied by Bishop Nursery, as low-density which would allow a maximum of 13 homes, not the proposed 15. Other objections touched on increased traffic on Home Street with three public schools just a few blocks north of the development as well as variances required on road widths within the subdivision.

As Jones explained prior to public comment, the Council’s task Monday night was to accept, or not, the Negative Declaration. Zoning and variance questions would be dealt with by the Planning Commission.

Council member Pat Gardner moved to accept the Revised Negative Declaration, Joe Pecsi seconded and the motion passed 5-0. The next step will be Bishop’s Planning Commission with its recommendation coming back to the Council.

Then came the surprise.

After lengthy discussions by the Council and a Planning Commission session that lasted until 11 p.m. in early December, the Council opted not to put an ordinance on the books regarding growing medical marijuana. With no ordinance, growers within the city limits, and within Inyo County for that matter, are regulated by state laws.

The depth of Council member’s lack of knowledge of marijuana growing and the complexity of the process became clear early in the public hearing. Grower Craig Clark questioned aspects of the ordinance including square footage, wattage restrictions, language referring to previous drug convictions and applications for permits for people already growing under state law.

Alena Wagner, president of the Pals Collective, offered herself as a resource for fine-tuning the ordinance. The Collective would not have been impacted as it operates outside Bishop city limits, but speaking for the 200-plus patients served by the collective, Wagner was concerned the ordinance would limit patient access. Jacob Wagner offered further information on grow-light wattage and effectiveness, explaining that the quantity and quality of individually grown marijuana varies depending on the knowledge of the grower. He also offered his expertise in helping the City work into what is assumed to be the inevitable legalization of marijuana for recreational use via a ballot initiative.

While Pecsi stuck with his firm no-marijuana-anything stance, Councilmember Karen Schwartz acknowledged the lack of knowledge. “We’re not experts,” she said, “we don’t know the unintended consequences. I don’t want to create a can of worms on something we know nothing about.” Mayor Laura Smith’s assurance that the Council could make changes but needed to put the law in effect prior to the State’s March 1 deadline.

However, that deadline may not be a deadline at all. Inyo County was advised the Legislature would pass “clean-up” bills removing the deadline. The Board of Supervisors opted for a wait and see position as did Mammoth Town Council.

In the end, Pecsi’s “let the State do it” won the day, unanimously.