So as promised I stopped by the newest “eatery” in downtown Big Pine, Dick’s Smoke-Wagon, to do a food review. I met Dan 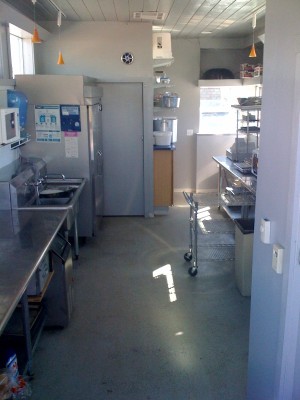 Hoffman, owner, who showed me around. I ask Dan, why don’t you call it Dan’s Smoke-Wagon? Turns out that Dan was a big time cowboy in the past and one of the greatest cowboy cooks he knew was a guy named Dick Chidester. Thus Dick’s Smoke Wagon. Turns out that Mr. Chidester had a horse drawn smoke-wagon similar to the one you see at Dick’s in Big Pine.

Talk is cheap so let’s get on with the taste test. I told Dan to give me the best he had. The first course was a plate of pulled pork, slow cooked over wood for ten hours. This pork was so tender and juicy it literally melted in my mouth. On top of the pork, Dan slathered gobs of his lip smacking, homemade “custom” BBQ sauce. It was sweet and tart, smoky in complexity with just enough spiciness, thick and rich. Oh, did I say RICH! Next came his homemade BBQ “pit” beans in a light sauce. The beans were perfectly cooked, with just enough “kick” to make them really interesting.

For the grand finale, I was given a couple of bacon wrapped, cream chesse stuffed jalapeno peppers. Wow, the bacon and cream cheese were just enough to cut the fiery tang of those peppers. All of this was washed down by great homemade lemonade.

Overall, this was certainly not your mother’s BBQ dinner. So for an outdoor eatery, I give it a big time rating of four stars out of five.

We work to provide daily news to all of the Eastern Sierra, in the tradition of Eastern Sierra News Service and the Sierra Wave. We bring you daily happenings, local politics, crime, government dealings and fun stuff. Please contact us.
View all posts by News Staff →
McCoy Photo Exhibit in Los Angeles
Caltrans Advises a Watchful Eye for Deer on 395