Inyo County Sheriff’s Investigators arrested Jeffrey Barnes on June 11th, while in custody at the Inyo County Jail, for attempted murder in connection with the May 23rd shooting in Lone Pine. On June 13thBarnes was arraigned and officially charged. Bail has been set at $770,000. 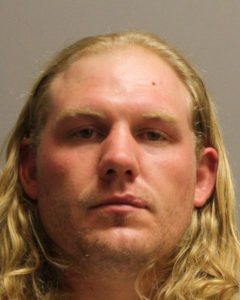 On May 23rd, Inyo County Sheriff’s Dispatch was contacted with a request for a deputy to conduct a welfare check on an individual who had not shown up to work. After responding to the residence on Post Street in Lone Pine, deputies discovered a male subject inside that was the victim of a shooting. The victim was transported to Southern Inyo Hospital and later flown out for further medical care. Evidence at the residence indicated that this was not self-inflicted.

Barnes is the only suspect facing charges in the May 23rd shooting at this time. This case is considered an open investigation so anyone with any information that can assist is urged to contact Inyo County Sheriff’s Office at 760-878-0383. You can remain anonymous.

This is a new photo, in a previous photo he was smiling, he’s not smiling anymore. Funny, real funny, hilarious as a matter of fact!

Come on! This is inyo backwards county here! This will drag on for 2 or 3 years then get dropped down to a “Home invasion” charge and then he will be set free for time served!! Pffffff

Buzz Killington…So true,who does need the “American justice system “,the way it’s turned into….these guys,doing what they do,what do you think the “justice system ” would’ve been like for them in the 1880’s ?….this guy here,bail set at $770,000……unless I’m mistaken,that means 10 % of that to get him out… Read more »

Who needs the American Justice System when we have Low-Inyo……

FedUp…Amen to that post….will happen….again….watch and see….and like Pedro says in his above post,this guy,or his buddies and the charges they face,none of them would want me on the jury for their trials….

But if he was an Illegal Alien Mexican Without Documentation you would consider him INNOCENT.

INYOFACE….who the hell said anything about being a legal immigrant or not ?…back at you,just cause he’s white and legal,does that make him innocent ?…from what I hear,this guy’s been nothing but trouble…and lucky he didn’t break into the wrong house and waking someone up doing it before getting to… Read more »

Congrats to Mr. Barnes who will soon be living off the taxpayer’s dime in his new ocean front accommodations at Pelican Bay. Bon Voyage!

Now , Why in the hell should Jeff get pelican bay when he has not even been convicted of attempted murder yet ! Let Alone Murder .
Boy oh Boy are you a Bigot or What.

He has been involved in quite A lot of of serious crime!
He is getting his karma!

I actually agree with you on this one Lower. Amazing, but some people never seem to learn or give a damn.

Trying to avoid jury service again? Don’t worry, neither side wants you sorting this out.

Good, lock him up.