Mammoth Lakes, CA – Artistic Director Shira Dubrovner announced the Mammoth Lakes Repertory Theatre’s holiday production, Barefoot in the Park, is an entertaining holiday treat and a tribute to the comedy genius of Neil Simon who passed away earlier this year. Dubrovner directs a talented cast of locals in what will keep residents and visitors alike rolling in the proverbial aisles. 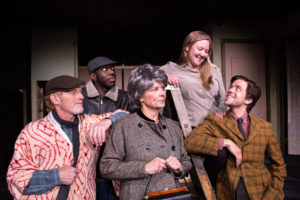 Barefoot in the Park debuted on Broadway in 1963 and was a huge success, running for 1,530 performances. It was Simon’s longest-running hit, and the tenth longest-running non-musical play in Broadway history. Directed by Mike Nichols, the original cast starred Elizabeth Ashley (Corie), Robert Redford (Paul), Mildred Natwick (Mrs. Banks), and Kurt Kasznar (Victor Velasco). The play was nominated for three 1964 Tony Awards; Nichols won the award for Best Director.

“What makes this play so entertaining,” stated director Dubrovner, “is Neil Simon’s writing. His writing was successful, and still resonates today, because of the characters and situations he creates. He is skilled at the ability to balance comedy with insight and sentiment. And we can see ourselves in the characters he creates.”

Simon himself said “I used to ask myself: What is a humorous situation? Now I ask: What is a sad situation and how can I tell it humorously?” Through finding humor in his characters’ troubles, he redeems what is sad and messy about their—and by extension, our—lives. 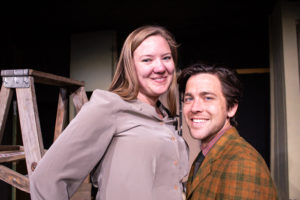 Straight-laced Paul and free-spirit Corie Bratter are newlyweds in every sense of the word. After a six-day honeymoon, they move into their tiny New York apartment and get a surprise visit from Corie’s loopy, uptight mother. They decide to play matchmaker during a dinner with their crazy neighbor-in-the-attic Velasco. After the strange night out and the events that follow, they begin to wonder if maybe they are too different for one another. The honeymoon might be over, but these two young adults (and the older folks too) still have plenty to learn about themselves and the realties and compromises that come with being in a relationship.

WHAT: BAREFOOT IN THE PARK by Neil Simon