The Big Pine fire broke the hearts of many with the destruction of homes and the loss of everything for many people. The 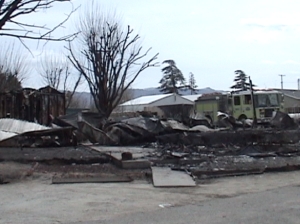 other awful burden – clean up of the destruction. That’s where the California Southern Baptist Disaster Relief Organization comes in.

Fred Weatherly of Mammoth Lakes is a member of that organization. Weatherly known for his High Sierra Resort Ministries. Weatherly will meet with those in Big Pine who lost their homes on Thursday at the Baptist Church on Chestnut Street in Big Pine at 6pm. A team from the disaster group will come to Big Pine at the end of the month to get started on the big job of clean-up, and it’s all free.

I talked to Fred Weatherly about what the Disaster Team does. He said they respond to disasters all over the United States. Weatherly personally worked on the Northridge earthquake aftermath and a fire in Santa Barbara.

Members of the Disaster Team have agreed to come to Big Pine to remove burned debris, trees, remnants of homes. “We typically bring heavy equipment,” said Weatherly, “as well as a lot of manpower. We have lots of volunteers who have taken time off from their lives in Southern California.” He said the team will stay here for as long as it takes.

“This is our way of expressing community concern and service.” Weatherly said the group will also offer individual consultations and a team chaplain for emotional and spiritual support for those who request it.

That meeting to arrange for clean-up is Thursday at the Big Pine Baptist Church on Chestnut St. at 6pm.

We work to provide daily news to all of the Eastern Sierra, in the tradition of Eastern Sierra News Service and the Sierra Wave. We bring you daily happenings, local politics, crime, government dealings and fun stuff. Please contact us.
View all posts by News Staff →
Ways to help Big Pine fire victims
Eastside This Week: Blood Drive, Fundraising & Volunteering